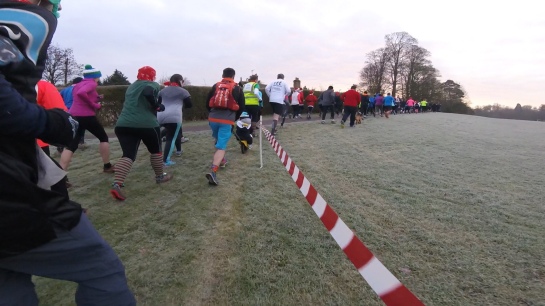 ASK, the GingaNinja and I were having a pretty damn fine time at the Mince Pi: A Race of Two Decimal Places until at the final 300 metres the GingaNinja offered ASK a choice… and then meltdown occurred. Oh dear

Pre-race the GingaNinja had indicated that a lack of any training was probably going to hinder her progress and she would consider a single lap without stopping a decent measure of success. I suggested that ASKruns and I would accompany her to provide moral support and also earn the toddler another medal, I would then continue to run the marathon or ultra distance.

We arrived at the race registration at just the right time to avoid getting too cold despite having to help a woman move her 4×4 from the slip road of the motorway to the curb – I feel for her husband who left the car without any fuel in it – she was going to be furious with him when she got home., I digress…

Registration was quick and easy, we collected a couple of new Wacky Event buffs and pinned our numbers to our fronts. ASK was excited and keen to get going, the GingaNinja was keen to start so she could get finished.

We ambled along to the start and stood at the back where we knew the Unirider would cause the least disturbance to the other runners and with conditions being both a bit wet and icy I didn’t want to risk losing my footing. There was also the fact that we were playing the role of cheering squad to help the GingaNinja and so we would probably be going a slightly more restrained pace than usual.

ASK and I, as the runners set off, darted ahead of the crowd and hoped that the GingaNinja was following us but the she had been caught in the dozens of runners and so I took my foot of the peddle and let some of the others go past us until we were back together. And we pushed on gently amongst the crowds as they all settled into their rhythm. 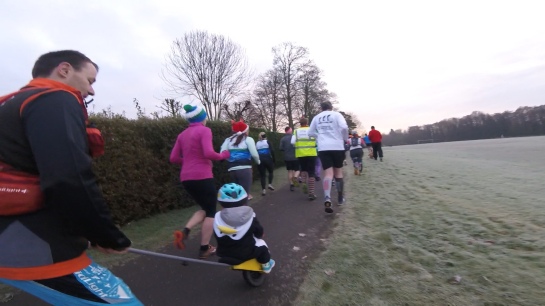 The route was exactly the same as last year and I say this as a good thing because there’s lots of lovely little twists and turns as well as some delightful up and down hills. ASK and I shouted encouragement to the GN from a position about 10 metres in front of her hoping to ensure that we kept momentum as the lap progressed and it was progressing well.

We ran through the trail to the first big challenge on the route which is a frosty downhill before an icy and slick wooden walkway. Most of the runners took the steps down the hill but we took the slightly wilder route to the side and thundered down to the bottom. The GN who was now nicely warmed up followed behind us making good progress through the wintery conditions.

One thing to note about running with your toddler is that ‘Scenic’ really helps to keep your toddler happy and the rushing water of the lock, the ducks and the breaking of the puddles of ice with the Unirider served as very happy times as we ran. As we crossed the river bank ASK wanted to do a little bit of running and so she joined both the GN and I and did a few hundred metres before returning to the comfort of her ride. I knew that the ‘big’ hill was almost upon us and given the conditions over the last couple of weeks I suspected it would be slick and muddy rather than a dry and fast climb. 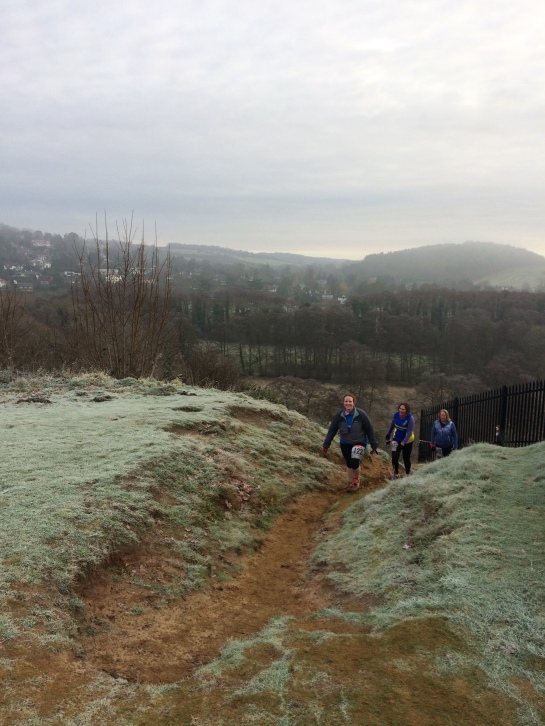 ASK and I took a crack at it and although I knew we could do it the GN behind us was ‘advising’ us to walk and once that happened then ASK wanted to do what mummy had suggested. However, my little toddler powered up the hill with greater aplomb than her penguin outfit suggested she was capable of and we toddled to the top in quick time. With the GN back in tow we headed off to complete the second half of the lap. 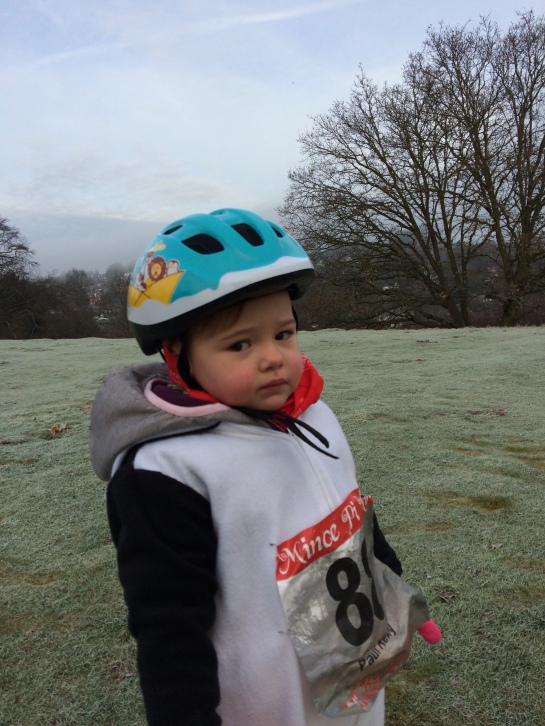 Top of the hill, hurry up mummy!

From here we had the lovely Tony as company periodically as we kept overtaking one another and ASK would remind her mum that she needed to go faster to overtake people! Perhaps it was the words of our toddler that kept the GingaNinja going but as we approached the final bridge she was looking in good shape and so I broached the topic of a second lap – sadly this was shot down long before I’d even finished my sales pitch and so we pressed on. 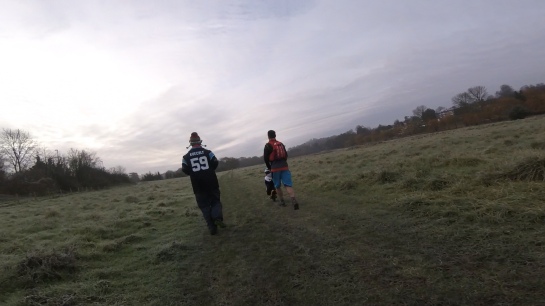 Into the final turns of the event and I knew that the finish line was just ahead – ASK had enjoyed herself and she just wanted a final flourish with her mum. I had decided that I would run her in on the Unirider but the GingaNinja unwisely gave the toddler a choice of running the last section and at 300 metres from the end caused ASK to go into a meltdown.

There wasn’t much that could be done at this point other than get her across the line and hope that a medal cured all and in truth it did – well that and a chocolate treat.

In truth I was a little bit annoyed with the GingaNinja (and myself for not making my plans clear) as ASK had mostly had a good time on the route, had enjoyed the challenges of the race, had enjoyed the attention she received from the other runners and supporters, had enjoyed chasing and cheering her mum and had really enjoyed getting the medal. But the run up to the finish took away some of the overall good feeling that had been gathered by this truly wonderful end of year event.

Thankfully post race we got changed and went back out on to the route to cheer ‘hooray’ as runners went past and this returned some of the cheer to my festivities.

Conclusions.
The guys at Wacky Events know how to put on a really good event and I would go back and do this year on year if I wasn’t planning on moving to Scotland before this event comes around again. However, I can highly recommend that you take part. It’s wonderfully priced, it’s a really awesome route, there’s a great medal and a free snood/buff/neck gaiter thrown in and combine this all with a feast of savoury and sweet snacks and you’ve got a winter winner.

For my part seeing my partner back out running and doing it well, albeit over a relatively short distance was really good and despite the mini meltdown that my toddler had we had lots of fun on one of my favourite looped routes. I’d also like to say a huge thank you to the organisers for letting us run with the Unirider during the event and a huge thank you to all of the amazing volunteers and supporters that littered the route with cheers and waves which only encouraged both the GingaNinja and ASK.

And the Unirider?
This was ASKruns and I using the Unirider for the first time at an organised event and it was awesome. We did sensible things such as stay at the back (mostly). Keep clear of the other runners and only do moderately silly things like ride straight through the wet mud and the icy puddles. If you’re a Unirider user and can find races that will allow you to enter then you’ll have a really good time. ASK and I are already on the lookout for our next event (I’m thinking a spring 10km) because she was quizzing me about next race once we had gotten home, so yes she may have had a meltdown, you may have seen her have a meltdown but that hasn’t quashed her desire to run again