You know Ming’s law Barin, outside his own Kingdom the hunter becomes the hunted.
I went to the Isle of Skye for two reasons really, the first I’ve discussed in my review of the Skye Trail Ultra which you can read here the second is perhaps the more important – Flash Gordon.

I swear by the great God Arbour I’ll not kill you unless you beg me too.
After I returned to my accommodation post Skye Trail Ultra I crawled up the stairs and went to sleep, disturbed only by one of the staff who thought the room would be empty and wanted to change the sheets, what she discovered was the remains of an ultra runner.

Sorry Munson you had your chance.
Anyway around 2pm after a few hours rest I started the process of cleaning myself up and preparing for my next adventure. I was going to head to the airfield on the Isle of Skye where the 1980 classic cult film Flash Gordon was part filmed.

Oh Flash!
My feet were sore but I had pierced most of the blisters, sealed them up, put thin socks over them and was wearing my most supportive Hoka (as all my Altra needed drying out). I packed a bag with GoPro and some lucozade and unfurled my cheat sticks which were the only thing that was going to make this 4.5 mile journey to the airfield possible.

This Ming’s a psycho
I moved gingerly through Broadford, taking in things I hadn’t seen before and admiring the bay, which on a bright late afternoon in May was delightful. I hadn’t realised how hilly the route would be but thankfully with my poles I was able to offset the pain in my feet. I’ll be honest I stopped a few times but this was more to check I was on the right route rather than for rest. I took the road via Lower Breckish which meant I came off the main road and could continue to admire the lovely scenery of Skye and about an hour or so after setting out from Broadford in the distance I could see the end of a runway.

If I had my time over, maybe I’d do it differently but I can’t help a man who’s dead!
Bugger, I was at the wrong end of it. Hmm. I decided that fortune had favoured the foolish or perhaps the adventurous and so dropped down closer to the coast, passing a small cemetery and parking for those wanting to get onto the beach. I now left the road to crash through the undergrowth once more. There was a stream that also needed crossing and so I carefully wound up my poles and leaped across the stones, much as I had during the race and clambered up the embankment. Here I was greeted by the barbed wire fencing and while I’m not normally noted for trespassing I vaulted over the fencing, Prince Barin style onto the airfield. 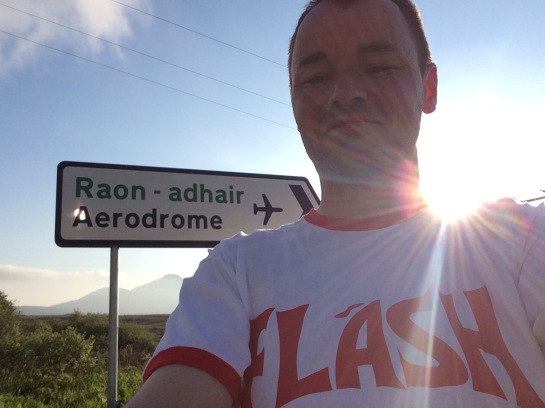 Forget it Ming, Dales with me!
The next half hour was spent shooting video calling out ‘Gordon’s Alive!!’ and ‘Flash, Flash, I love you but we’ve only got 14 hours to save the Earth’, many pictures were taken (see examples) and I felt a deep sense of satisfaction that is completed the two things I came to Skye for.

Flash Gordon to Vultan … Flying blind on a hawk man rocket cycle!
I may not be Flash Gordon, I’m not even a Zarkov or Bero but this visit let me connect to one of my favourite films of all time. Thank you Skye and thank you to the cast and crew of Flash Gordon. 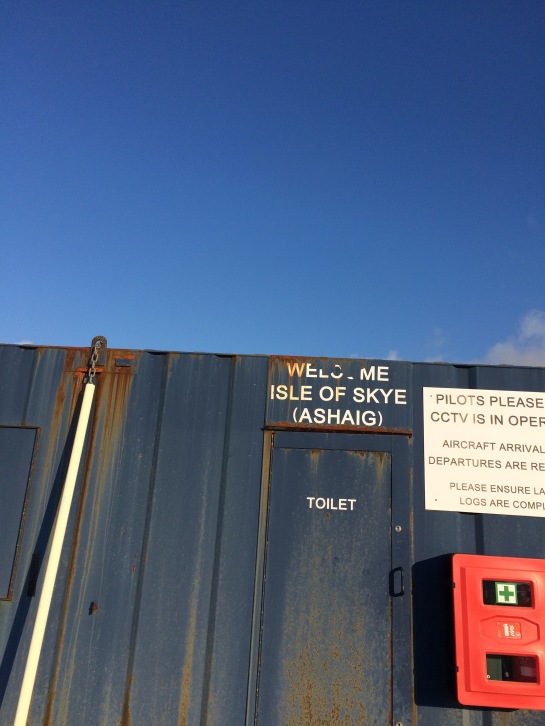