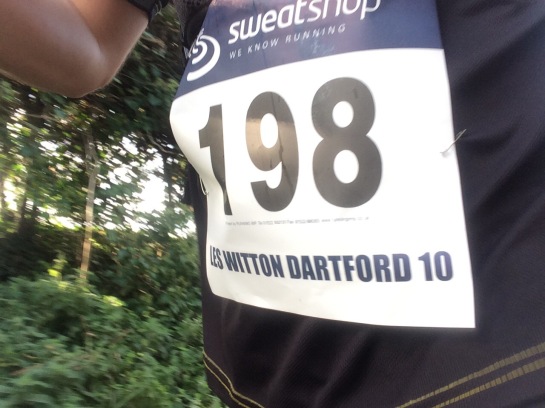 What better way to mark the arrival of being 37 with a couple of little races, I’d just take it pretty easy but try out my hamstring in preparation for the W100 but then several things happened including a very weird dream and reacquainting myself with my running arch nemesis.

Weird
On Friday night before I’d intended to set out for my VirtualRunnerUK 10km I had a dream which was basically a conversation with my vibrating hamstring but in my dream the hamstring had taken the form of Carole Plowmans (my ex partners, sadly, now deceased mother) banana yellow vibrator which once assaulted me while leaping out of a bathroom cupboard and hitting me on the forehead. Further it kept calling me ‘Dave, you’re my bitch now’ in the style of Papa Lazarou from ‘The League of Gentlemen’ – I think my hamstring was sending a message from beyond the ether.

VirtualRun 10km
However, after waking up from the craziness of my own dreaming and opening some excellent birthday presents – including my awesome new Buff – I set off. With having a ten mile race the day after I decided I’d take it nice and slow around the Kentish hills and trail and this is exactly what I did, nothing too speedy either and the hamstring that has given me so many problems stayed quiet and only my groin and pelvis had a minor flare up. This was a result, even if my time was a stodgy 56 minutes. It was also the first time out for the Pearl Izumi Trail N1 and they were pretty damn fine (a full review will take place once I’ve put some bigger mileage on them).

Les Witton 10
The Les Witton 10 is supposed to be one of the year openers – normally taking place early January but the last couple have seen it cancelled due to extremely poor weather conditions. These cancellations seem to have forced the hand of the organisers and they’ve called time on the event but there was still time for one last hurrah and at the fourth time of asking I was going to be running it.

With an 8.30 start I needed to be up nice and early so that UltraBaby could have some food and get suited up to watch UltraBoy do his thing.

We arrived at the sports ground in Dartford at around 7.30 as instructed and headed into a rather plush sports/changing facility, I ran upstairs to grab my number and quickly headed back down to the GingaNinja and UltraBaby. Despite there being hundreds of runners milling around I had everything sorted incredibly quickly and even my pre race toiletry movement was a rather pleasant affair because there wasn’t a queue, there was shit roll and the toilet didn’t look or smell like a cesspit.

The start line was set up just outside the swanky facility and in front of me were several hundred runners and supporters, I turned my back on them and headed to the astro turf playing field and did a few warm up laps followed by a lot of stretching. The warm up proved to me that my injuries were still very much there but in truth is known this all along and so I prepared as best I could, took some paracetamol and ibuprofen and marched purposefully to the start line or rather the back of the crowd at the start line.

It was a wonderfully bright and autumnal morning punctuated by hints of late summer warmth and you really couldn’t have asked for a better day and with the notices given out the race began with the runners gently moved forward.

My aim was anything under 2hrs with 1hr 45mins being considered a good finish (to put it into context a hilly trail ten miles will normally take about 70mins). I’d run much of the route before as part of my training for the White Cliffs 50 but I’d never run this exact route and from the off it proved to be nothing but hills – both up and down.

I was going nice and slowly and pacing myself pretty well, even on the downhills and then it all went wrong – I saw my running nemesis in the distance. He’d started a little bit ahead of me and for a while I sat back wondering if I should just drift behind him but then the old body reminded me that going too slowly was bad for me and not running the pace I felt comfortable with was going to be a bad idea.

Go on feet!
I passed the old nemesis and chugged on through the crowd – gently passing runners as I bounded down one of the few flat sections on the course. As I came up to the hills I decided that it would be best to attack them with all the speed I could muster and so with each incline I found an extra gear and stretched out my legs (only nominally paying the price when I hit the top of a section).

The great thing about the back of Dartford is that it’s actually rather pretty and so the views went from the town through to something more akin to the popular view of rural Kent. In the glorious morning this made my running all the more fun.

It was now an hour in and I’d made it beyond the 10km point, which I thought was something of a miracle given that my hamstring, groin and hips had all at various points been on fire. My genius plan of wearing Skins compression leggings had helped I believe but not really enough to stop the injuries bring a constant reminder that running wasn’t a good idea! However, I was well within sight of my goal and that 1hr 45 seemed a little generous and so I recalculated and aimed for 1hr 30 – I had however forgotten the final brutal hill back to the finish.

I pressed down on all my courage and threw myself up the hill, not only did I now have a target for time but I was sure my nemesis and his acolytes weren’t far behind. I reached the top of the hill and have renewed vigour to my efforts but for all my efforts there was no sprint finish in me (which would have given me my 1hr 30 – instead I ended up at 1hr 31 and I can live with that.

I crossed the line several minutes ahead of the chap I was looking to beat but that was bettered by the delightful medal I received, which was bettered only by the sight of the GingaNinja and UltraBaby at the finish cheering towards me (although I think one of them was asleep).

The Les Witton 10 miles is a great race and I really enjoyed it and hope that it returns in some form or other. As for me I’m back running but it’s hard going and I’m struggling with the hamstring particularly but with the Winter100 just around the corner I need to keep on moving.