Post Saltmarsh I was a big mess and I really didn’t fancy Ranscombe but I did fancy seeing some of my favourite runners again and meeting one very awesome runner who has been something of a source of inspiration to me over the last three and a half years. It was therefore with a cheer in my heart and a limp in my step that I found my way to the farm reserve near Rochester in Kent.

Pre-race
The GingaNinja and UltraBaby were just dropping me off for once and would rejoin me on my final laps but this wasn’t unexpected and so I climbed the hill to the start line, grabbed my number from the ever excellent Rachel. On hand I noticed were my absolute favourite volunteers too, I knew today was going to be a good day. Over by the kit I could make out the runners I was looking for ‘The Kat that got the Cream’ and ‘Jumpin’ Jack Jools’ or Kat and Jools as I shall refer to them more accurately. I’d met them for the first time at the Twilight Ultra and not recognised them but here I drifted off for a bit of a chat. With chatting well underway I waved and greeted other runners such as Gary who I hadn’t seen since TP100 and then creeping up on me came young EmLa. I say creeping what I mean is she burst in with a brilliant nervous energy and I was enveloped by a warm hug from a lady I had just met – today was going well. I also said hello to EmLa’s friend and support crew Lucy. Lucy was clad in her best walking boots which had seen her climb Kilimanjaro recently along with EmLa – she was probably going to need them today.

Poor Lucy
While EmLa disappeared to do pre-race bits i did what I do best ‘act like a knob’ and proceeded to give Lucy the full tour of Ranscombe through the medium of dance and gesticulation.

Thankfully for her EmLa returned. 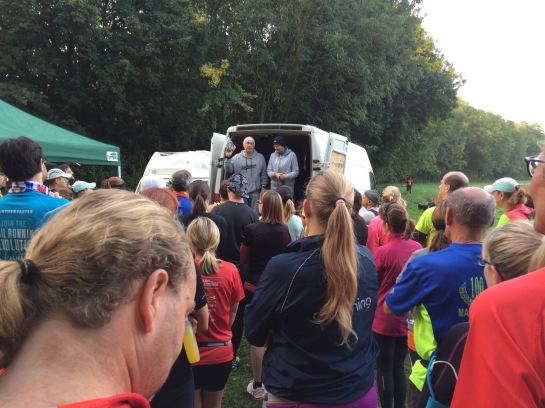 Now we run
With proceedings well underway Traviss called us all over to wish Rob well for his 100th marathon attempt (and success) and then have us his safety and race briefing. As usual it was another smooth running SVN race start and Kat, EmLa, Jools and I took our positions – at the back and then we were off. The start caught me by surprise as I hadn’t even prepared my Suunto for the race! Regardless by the time I was 50metres I was set and ready to concentrate. I was intending to stay with EmLa for the first lap and then let her get on with it (as I’m fully aware that running with me for any length of time can be quite a chore) and as Kat was running around the same pace as EmLa and myself, I was quite happy just drifting around doing my thing. At the same time though this was a delightful opportunity to chat with both of them and find out what drives and motivates them. Annoyingly what I found was I spent most of time gabbling absolute garbage but I don’t mind the sound of my own voice and during the first lap we simply jollied our way round the hills and trail until we turned back to the first piece of Tarmac for the end of lap one. I wanted to stretch my legs a bit at this point and so thrashed it back down to the start. Ahead of me was Rachel holding a purple hair band but what I wanted was a pink one and so at the last second I leapt over to the other ‘bandgiver’ and took a lovely pink one for my wrist.

I drifted over to the food station, started eating my own body weight in mars bars and cakes and awaited EmLa and Kat. 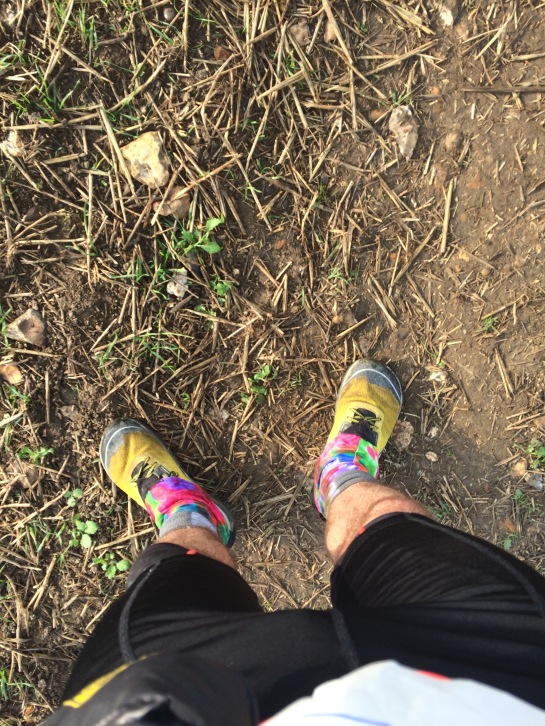 A couple of minutes passed and soon my companions joined me. ‘Okay?’ I asked. The reply was positive but EmLa hadn’t run for a several weeks and had come back recently from successfully climbing Kilimanjaro and so perhaps wasn’t as geared to this as she might otherwise have been.
I advised food and water and she at least took on board liquid but insisted she would wait until the next lap to eat.

Lap 2 was more running and now the course was known so we could take a sensible approach to the race. My problem was that on the downhills my ITB was firing burning lightning bolts up and down my legs. I tried not to mention this too much as I was determined to get to at least a marathon distance. We reached the first significant downhill of the lap and I came across a sprightly young runner who I insisted she join me in pretending to be a Spitfire as we launched ourselves down the hill (she didn’t join me much). At this point I thundered up the incline that now awaited us and bounced up the steps, EmLa never far behind as he poured tremendous effort into the hills. For the main big climb of the Ranscombe lap I advised that we save ourselves and use the run-walk strategy which meant we powered up hill 2 as quick as we could and then when the route opened up to the flat again we’d give it a bit of welly. As we came away from the field and through the gate we descended with great aplomb, faster and with assurance – EmLa seemed to getting into a solid stride and looked good as we drifted up hill climb 3 and 4. Through the trees we pushed on (were on lap one I’d almost face planted a cow pat). The trees offered both cover and a change of terrain, this is perhaps my favourite part of Ranscombe and as we came out the other end and onto the path I breathed a big breath and looked back – simply pleased to be here. Onwards we pushed and as we came into the aid station we still looked surprisingly good. Food and drink were consumed this time around and we set off again. This time we met Lucy and I stopped to chat for a bit and it was agreed that lap 4 would be a ‘marching’ lap.

For lap 4 we had the lovely Kat and the excellent Jools (who was banging out laps for fun) and while it wasn’t a fast lap it was the perfect time for us all to recuperate for the final push and to pass the halfway point of the marathon distance. Talking with all them offered fascinating insights to people I know really only through social media but perhaps it shows that those who inspire online are even more inspiring in person. Hearing about Kilimanjaro or Kat and Jools year of marathons served to remind me why I do this.

And so to lap 5 and Kat departed ahead of me and EmLa and it was here that I could the strain of a lack of extensive training was having on EmLa. I told her that she should concentrate on the race, eat more sausage rolls and shut the fuck up as I could talk for both of us. ‘Two more laps then a warm down lap for me’ she said. I agreed though harboured plans (in conjunction with Lucy) to force her out for an ultra lap.

We bounded around lap 5 nice and powerfully – EmLa showed all the strength and determination that I’ve been so inspired by and as we came in for Lap 6 she decided that this would be a powermarch lap (with Lucy – sensible given her lack of recent run training) and that lap 7, the final lap would be a run for the finish. Lap 6 went well, we thundered along and each step felt pretty damn good (though my ITB hated me when I wanted it to run again). As we headed home to the end of lap 6 I could see the GingaNinja, ThunderPad and UltraBaby in the distance, I ran past waving at them and UltraBaby followed me with all the speed she could muster – face planting the roadside as she did – bloody muppet.

EmLa and Lucy followed into the checkpoint and we had introductions for everyone. We loaded up on liquid and food and with the bit between our smiles we went out for one final, fast lap. We hit the first hill running, the downhill running, the next up hill (mostly running) and then onto the big bastard – striding forcefully then onwards, breathing deeply, taking on liquid and moving with the knowledge we were almost done. However, I needed to know that my partner in crime (or rather grime) would be okay if we didn’t do the ultra lap. ‘Will you be disappointed if you don’t do the ultra lap?’ I asked her. EmLa replied with what felt like a genuine reply ‘No’. Had it been a half hearted reply I would have coerced her into the final lap but it I knew stopping at marathon was the right choice.

For the final 2 miles we continued our pursuit of a fast final lap – EmLa pushing especially hard as she maintained the pace I was setting and as we came to final turn I offered a few words of advice. ‘This is the end, look amazing as you cross the line, when we hit the last hundred metres or so you just go for it, full thrust, have nothing left’. And this is what happened, I put the afterburners on first so I could get across the line before her and make sure she had finish line photographs and then EmLa pulled the magic out of the hat and rallied for a ‘both feet off the floor’ sprint finish. Brilliant. Just brilliant. 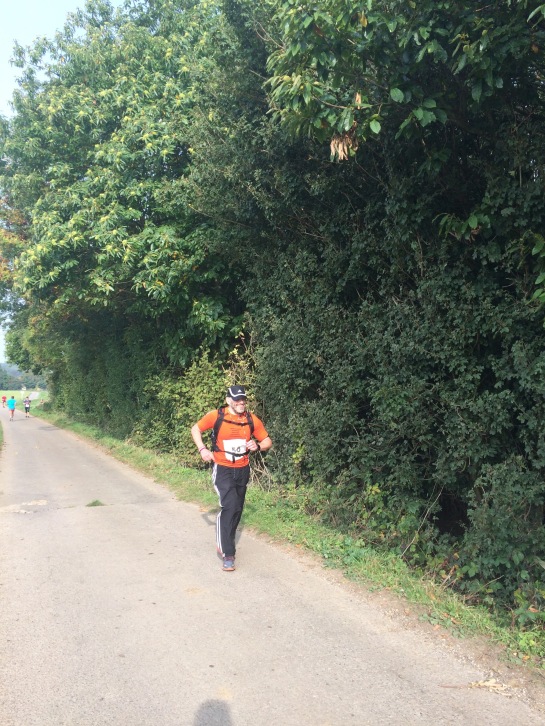