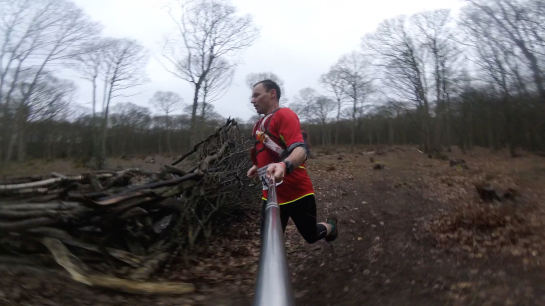 Attending an inaugural running event can be a dangerous thing, the route may not be fully tested, the organisation might not be quite as slick as when the event has been running a while and the atmosphere may be dampened by the attracting of fewer runners than a more established event…

Thankfully we then have the Hockley Trail Challenge which was blighted by none of the above, in fact I think it’s fair to say that this looped course deserves nothing but high praise and return visits! But let me rewind to 10 days before the race and recount another sorry tale from my personal pantheon of running tales.

I was recounting the story of the week before the Green Man Ultra in 2016 and how I’d been pushed into the road on New Bond Street and been hit by a car mere days before the Bristolian 45 miles. I joked that I hoped that didn’t happen again, it seemed however, that fate is a cruel mistress and as I was bounding along New Bond Street a plethora of tourists refused to get out of my way and I was forced into the road, pulling a muscle in my calf as I landed awkwardly.

I hobbled home and almost immediately cancelled my 49 mile Milton Keynes to London run and sat for hours with the TENS machine and the bastard rumble roller I own – there was Hockley Woods to get ready for! I decided rest was the order of the week and reduced my running to the bare minimum did nothing over the weekend and managed to see my physiotherapist the day before the event (never ideal). Anyway patched up and rested I rolled up to Hockley Woods in good spirits and a desire to have an amble round a new location.

By the time I arrived at 8.30 a few runners had congregated round the registration but many were hiding in their cars avoiding a pre-race soaking. Number collection was swift and smooth and I ran into Cherie and her husband who I met at the Ridgeway last year and we exchanged banter about our various abilities to do directions! 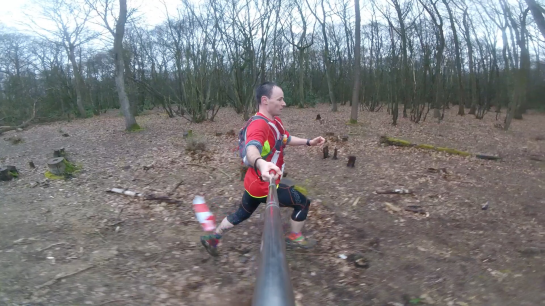 I soon returned to the family who had decided to join me so that the hound and the GingaNinja could get a few miles round the woods in before departing for a morning of trampolining pre-race UltraBaby and I bounded round on the Unirider chasing ThunderPad and the GingaNinja. However runners were soon called over for a short but useful race briefing and we all lined up for six hours of trail shenanigans!

I took up my customary position at the back of the course but as the start was called I quickly made my way forward through the other eventers, quickly catching the front four or five runners and settling into a very pleasant stride. 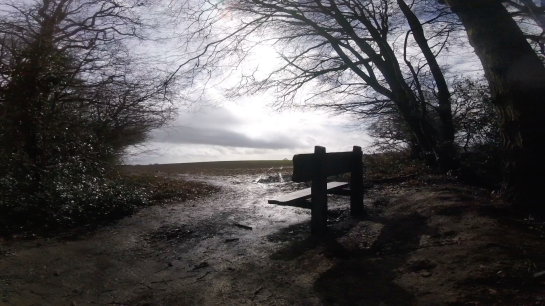 As I often do on looped events I look for markers and note conditions underfoot so as to try and see where problems, challenges or faster sections will occur later in the race and this one the course was replete with challenging conditions, grinding up hills, gnarly trail and the odd speedy downhill.

I quickly realised that the use of the word challenge in the title was very appropriate.
Regardless I pressed onwards, enjoying the spray of mud that had erupted all over my legs and I thundered through the first lap in under 30 minutes despite the reasonably heavy rain. The second lap went in an even faster time despite a stop to speak to UltraBaby who had been chasing round the woods after runners and our Spaniel, when lap three dropped at a similar pace my thoughts turned to a sub 4 hour marathon time for the first time in ages and a little over 4 hours for the eight laps I had targeted.

I took a few minutes at the checkpoint to gather myself for another lap and then set out again, still making good time and looking at a little over 2hrs for the first four laps. 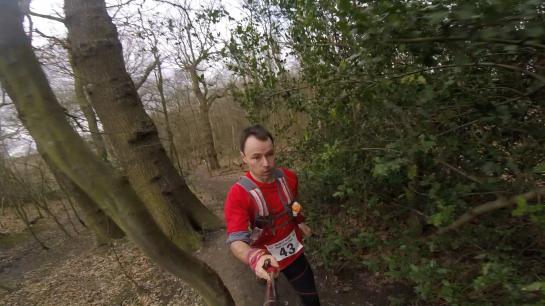 I was about halfway round lap 4 when I came across a horse riding teen, I’ll assume parent and dogs. Having been kicked by a horse in the past I know instinctively to give them a wide berth and I’d noted that the Collie looked nervous and I felt best I give it some space too. Sadly the dog decided to run between my legs and, in my efforts to avoid giving it a thoroughly good kicking, upended me – forcing me down badly and heavily on my groin.
I managed to hobble away, there was no word from the owner, an acknowledgement or even apology might have been nice but still. I knew I’d pulled something quite painfully and so felt around to see what was tense but it was just sore. I pressed in some thumbs and then moved on gingerly.

At this point I hoped I could run it off but all running was doing was aggravating it. I stopped periodically to stretch my leg out which would give a minute or two of relief but the Hockley Trail Challenge as a race, for me, was over.

I moved into the fifth lap looking grim faced and eventually telephoned the GingaNinja asking for advice, however, having already decided that I wasn’t going to give up I pushed on despite her wise words. I found myself now being overtaken and in some cases lapped which simply irritated me but there was nothing for it I had made my decision and you don’t DNF the marathon distance when you’re so close to home. 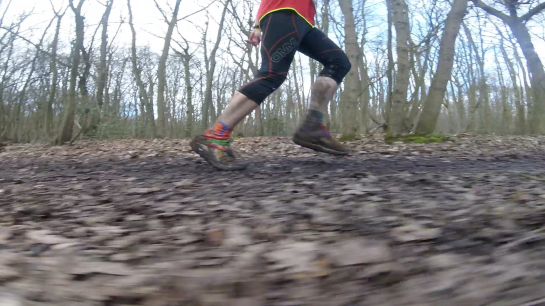 Thankfully I was still managing to run some sections of each loop which kept both my sanity intact and my timings reasonable given the pain I was in and I was fortunate to meet some lovely people as I ambled along (most notably Joe, a lovely, hardcore ultra running chap from Tipperary!) who provided excellent distractions.

Reaching the eighth lap I stopped at the checkpoint for a few minutes and ate some chocolate raisins, looking longingly at the medals, thinking ‘I should have had one of those hours ago’. But with these thoughts put out of mind I pushed on for one last go round Hockley Woods. With the rain long behind us, the sun out and the knowledge that I was less than 6km from finishing I continued to run/walk these last few steps. 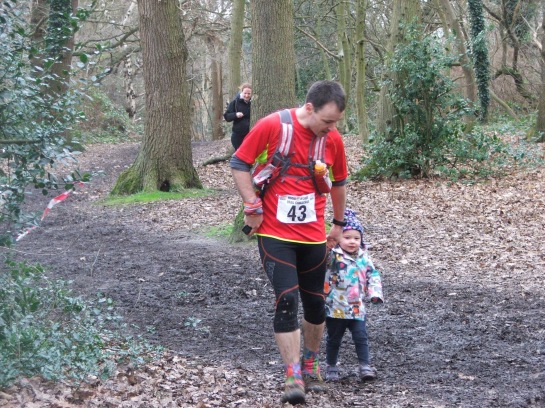 As a very pleasant surprise though my little daughter UltraBaby was waiting for me a couple of hundred feet from the finish line (thanks to the lovely volunteers for the picture). She jumped out to ‘scare’ me as she is prone to do and then joined me for those final metres. We bimbled towards the finish as UltraBaby told me we were racing and we crossed the line to much applause from the amazing volunteers. Sadly for me UltraBaby stole the medal, little sodding monster – thankfully only one of us ended up coated in mud and it wasn’t her!

Route
The route was much harder than I had imagined, hillier than I was expecting and conditions on the ground and the lapped nature of the course meant it got cut up pretty quickly. That being said once the rain stopped and the runners thinned out the course quickly returned to being more runnable for the most part. In truth despite the hills and mud this was a good running course with more than enough interest to sustain you for as many laps as you can manage. Hockley Woods looks like a really good training ground and if you’re local I’d recommend banging a few miles out. 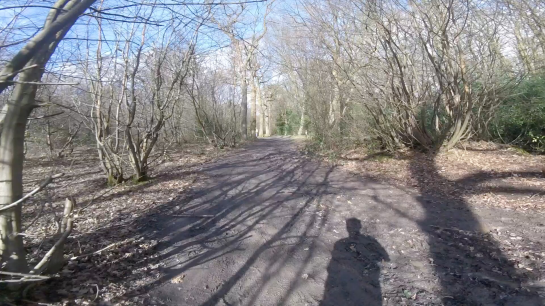 Organisation
The organisation was brilliant, the route was well marked, there were photographers and floating volunteers on the route and the checkpoint was well manned, well stocked and well protected for any gear that we had left behind. The volunteers were always on hand to provide the wrist bands to count our laps and there was always a lot of love and cheers as you rocked up to the checkpoint. 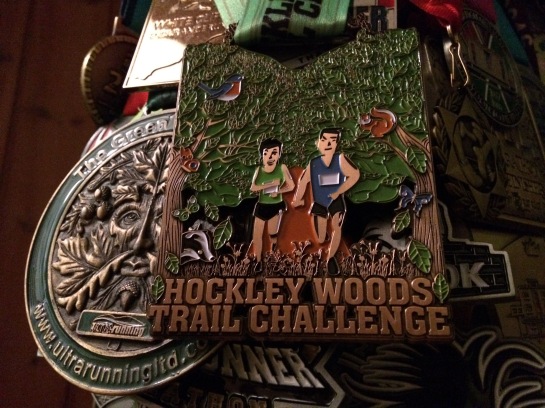 Awards
Medal and goody bag. The medal was big, heavy and has a fun feeling to it, the goody bag had Maltesers in (and other stuff) and that’s more than good enough for me. The real award though was the event and I think this was the general feeling from the runners I spoke to during the day.

Value for money
£30 seems like a very fair amount for a race this well organised.

I saw a Facebook post that suggested that £30 was too much but actually look at what you’re getting. A glorious loop on a glorious course with a big bespoke medal, an incredibly well stocked aid station/checkpoint and a really good atmosphere all supported by a wonderful team of volunteers who never stopped smiling. I’ll put it like this, I’ve paid a lot more for a lot less (I’m thinking East London half marathon and even the Royal Parks Half Marathon).

Conclusion
The Ranscombe Challenge (read the review here) has always held a special place in my heart as my favourite ‘laps’ marathon/ultra but the Hockley Trail Challenge has replaced it. I know that my experience was marred by getting injured but that doesn’t detract from the brilliance of this event. I would highly recommend running it’s a great experience and I know that I for one will at some point be back to add an ultra amount of laps to marathon amount of laps! 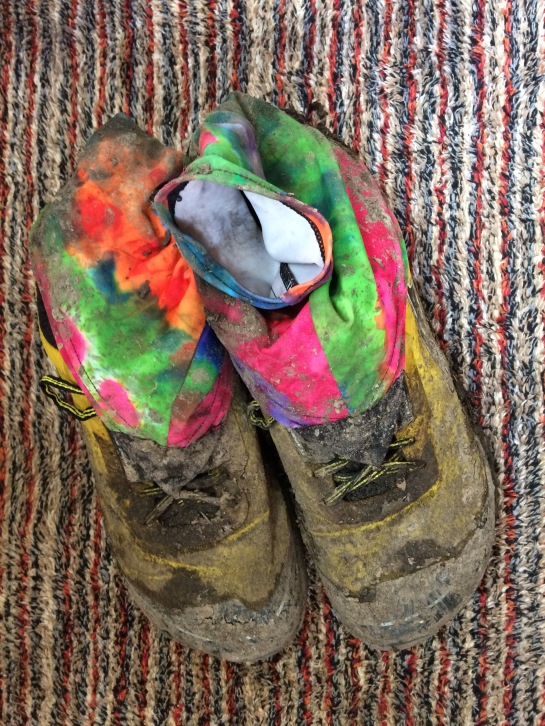 I can't run fast so I choose to run far.

Memoirs of an Average Runner

Taking it one run at a time.