‘I don’t feel well UltraBoy’ came the whine from UltraBaby, ‘look I’ve got big horrible spots everywhere, I’ve been crying all night, I’m full of snot and I look like a B movie monster on a reduced budget’.

She did look unwell, she sounded unwell and she moaned miserably, it’s fair to say that Friday had been a rough night on both the GingaNinja and I. At 5.30am we decided it wasn’t worth fight in her anymore and we all got up. Breakfast happened, puking happened and bath time happened. At 7.30am I said to the GingaNinja, ‘I’m going to take her to Parkrun, let you get some sleep and hopefully so will baby’.

Then it was race on – I hurled out the UltraMobile (or the Mountain Buggy Terrain to you), inflated it’s tyres, relocated the changing bag to the Salomon 14+3 vest, chucked in a bottle for her and a bottle for me and we bounded out of the house like a pair of runners possessed. I hadn’t decided which Parkrun we would be attending but I’d enjoyed Dartford a few weeks earlier and so we trundled along to the start line with just moments to spare.

UltraBaby was wide awake in the MB Terrain and as we started out we made our away from the back of the pack to sit quite comfortably in the middle, we even made a few sprints round people, taking in larger than needed cornering to let the ‘real runners’ through but by the time we had hit the end if the first lap we were fully into our stride and decided that we had the edge and would not be so generous in letting people past.

‘MeMeep’ I called out several times as we swerved round runners who had started to flag a little and ‘woohoo’ as we tried to stay ahead of the ladies who UltraBaby had decided were pacing us – Danielle (we left her at about 3.5km) and Jo (almost had us at 4km but we put a bit of a spurt on to finish just ahead of her).

UltraBaby crossed the line a little ahead of me as I pushed the MB Terrain forward a bit and we finished in a time of 27:28mins, not bad when you consider I’ve been ill for two weeks, she’s ill, my feet still aren’t recovered from TP100 and the MB Terrain as good as it is, is still a challenge to push.

Anyway we did post run chat with some of the runners, including the lovely @thayer who came to witness our inaugural Superhero Parkrun teamup.

So lots of fun had at Parkrun and despite being unwell UltraBaby felt like she had definitely been funning.

Saturday night though brought more and more tears, angst and spot related pain that would culminate in us attending hospital the very next morning. Thankfully a big dose of antibiotics and creams are hopefully going to help but once again the GingaNinja and I were pretty exhausted and with the baby in the house never of us could really rest. Then UltraBaby piped up

‘How about a trail 10km UltraBoy?’ 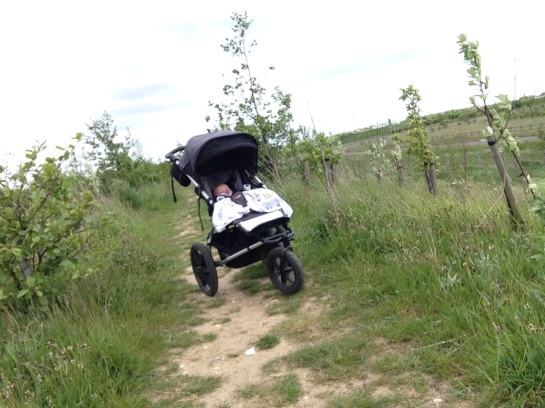 Out came the MB Terrain again, we loaded up, added in some sun cream as it was bloody hot and then started running with explicit instruction to the GingaNinja to get some rest. We flew, fast down the hills, fast up the hills, bounced along the technical bits and thundered through the narrow paths cutting a swathe through the undergrowth. The kilometres fell and so did UltraBaby (but thankfully just asleep).

Interestingly on a weekend of outstanding results at Dukeries, the NDW50 and lots of other great races I found myself being grateful that I wasn’t racing and simply fun running with my daughter in the Kentish sunshine.

There really is something to be said for funning. Happy running guys and thanks to Dartford Parkrun for some lovely running pictures. 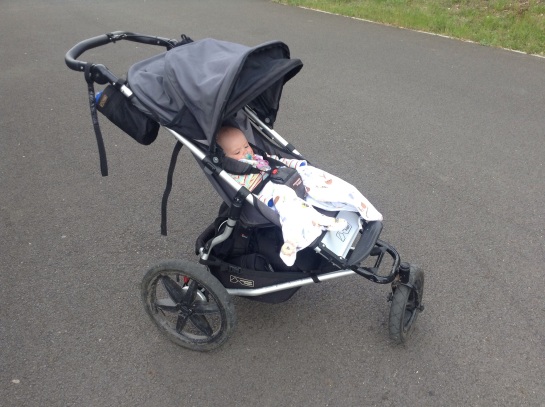 My garden project is coming together - shifted about 2 tonnes of soil and crap from the garden, did some levelling and started putting in my French drain. Hopefully we’ll have it all filled in with Scottish pebbles soon and our new outside seating area and plants. The GingaNinja is happy this is finally happening, my back is not #gardening #buildingproject #project #garden #soil #frenchdrain #undersoildrainage
Didn’t run yesterday.
I used to roll up on a race day and have enough kit to sink a battleship, I still don’t race lightly but this time everything will fit in my 10litre race vest and that includes the extra water, water filter, food and thermal layer I’ll be carrying because of no support crew allowed and covid restrictions making everything a little more challenging #raceon #ultrascotland #kit #ultramarathon #ultramarathonkit #ultraboyruns #ultrascotland50
Yesterday on the Fife Coast at Silver Sands for two special projects - one to run the Fife Coastal Path and the other more secret squirrel #fife #fifecoastalpath #ultraboyruns #projects
The wall knows how I feel, tonight’s run presented by the letters S, A & D 😮😀 #running #whatisawrunning #ultraboyruns #hamstring #racedaycountdown #runner #runnersofinstagram #instarunner
I might be being hamstrung by a hamstring but I’ve got a haircut fit for an ultra marathon #haircut #beardsofinstagram #hairofinstagram #ultramarathoner #runner #numberonebackandsides
NEW BLOG (link in bio): Hello racing, thought I’d drop by and say hello there.
New Podcast Episode
The Law | Andrew Gannel | Ben Cleuch
The Law | Andrew Gannel | Ben Cleuch
The Law | Andrew Gannel | Ben Cleuch
See you Sunday morning, bright and early #hiking #ochils #scotland #adventures #goodtobeback #map #osmaps
When your hair is out of control at both ends of your head #hair #sillyhair #hyggebands #ultraboyruns #offoutrunning
This is why I adore running in Scotland, I’m two minutes from a usual route but I’ve never been here, I’m alone on this trail and it’s lovely #scotland #trsils #trailrunning #ultraboyruns #instascotland
@askadventurer wanted to test out her new Trollkids sleeping bag before our first family wild camp. To say she loves it is an understatement #trollkids #sleepingbag #askadventurer #campingkit #newkitday #bedtime #sleepingbag #happychild #happydaughter
There are just a few days before I run the Ultra Scotland 50 mile race but my hamstring is being a complete and utter cocknocker (thank you Kevin Smith & Mark Hamill for cocknocker). #injurywoes #ultraboyruns #hamstring #kevinsmith #markhamill #running #trailrunning #raceprep #training #runningtraining
Love running here, not sure anyone else did
Carefree running