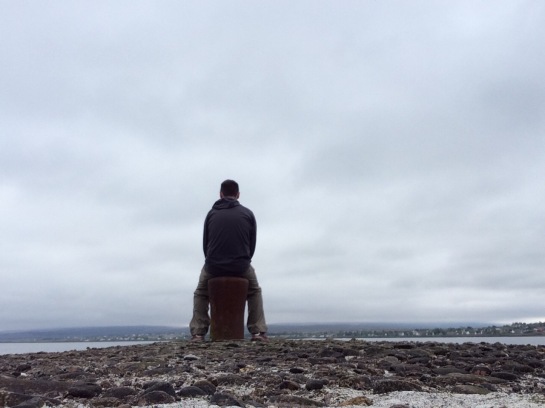 Let me start by saying I believe, very much, in the community of runners. I believe in it enough that UltraBoy regularly contributes to online forums, he blogs, tweets, trains, races, volunteers, buys the kit and even occasionally attempts to encourage others.

The real UltraBoy: I (Paul) keep the community at arms length because I don’t really feel part of it, feel uncomfortable in it and it was when the very lovely Chelsea suggested that I refused to go running with her that I realised she was probably unknowingly correct.

CG and UBR apparently live not very far from each other and run around the same trails but have thus far never come across one another. A few weeks back she suggested I should let her know the next time I’m at one of our shared stomping grounds – I said I would – but so far haven’t. This is because I haven’t been there recently but have I been avoiding it to curtail my angst over meeting my heroes? This becomes a distinct possibility.

Never meet your heroes: As I’ve discussed at length people such as Chelsea, the Emma’s and the Dans of this world are the people I look up to – real runners.

The elite or professional athletes have never really interested me because I can’t really aspire to be them, I can’t reach out and feel the joy of their achievements, it’s what makes the experience of my peers so valuable to me.

However, it pains me to admit that I don’t join them on running adventures because I would feel a disappointment next to them (and because I’m self aware enough to know I’m a complete arsehole).

It may sound stupid for a chap who has run more than 25 ultras in the last 3 years to be worried about how he is perceived by his peers – but I do worry. It doesn’t stop me turning up to the races (except the Hangman Ultra) that the others guys run but it does stop me hanging out with them. Importantly though I don’t believe I’m a social recluse or Twittering weirdo – I have tried but it never quite feels right. I always feel I wear the face of UltraBoy rather than me and inside I find I sit quietly while the character I’ve drawn takes over.

Don’t get me wrong though I’ve loved meeting all the runners from races or social media in whatever surroundings and I’ve come away from almost everyone thinking, yep you’re pretty awesome – I’ve been very lucky but I clearly have some stupid mental blocks that stop me expanding these excellent meetings of fellow runners.

I did have an ace opportunity to run with @borleyrose a little while back but a dodgy meal the night before meant I had to miss it – perhaps if I’d run with the lovely Kate I wouldn’t angst so much over the possibility of joining in. But I did miss it and despite this blog post I don’t dwell on the past (too much).

Trying the group thing: As an effort to be more run friendly I used to be a regular member of the London Social Runners group which was a very fine idea – running and brunch – huzzah!

Sadly, as I became more prominent in the group I found myself at the back, often helping other runners reach the end of the route and so I wasn’t getting much of the running element done from the Saturday and Wednesday meetings. The group was supposed to be 100% inclusive but to me it felt that leaving behind the slowest of runners wasn’t very inclusive and so I never, disappointingly, went back.

That said I’ve come across some of the guys periodically as they’ve become marathon runners and beyond and they are a lovely bunch and I’ll always say hello but I don’t let it to go further than that.

Ultra Philosophy: I suppose I also apply my ultra philosophy to training – run your own race, not someone else’s.

I don’t want someone to have to slow down for me (or speed up for me) that doesn’t seem fair and as I’ve already indicated I hate to disappoint. I did once hear the phrase ‘I thought you’d look more like a runner’ when I was introduced to a lady at a race as UltraBoy. How cutting!

As a final note, because this could come across as being a bit too self important  I’m also aware that I’m over thinking this, I mean ‘who the fuck am I?’ I’m aware I’m a nobody with a mouthpiece to the internet and the occasional completer of ultra marathons.

I’m happy to accept my nobody status but as this came up on Twitter a day or two ago it’s been nagging at me and I felt it deserved a considered response.

So I stay in my own bubble mostly but to Chelsea or Dan or anyone else I would love to go running with you some time but I might hang on until I’m less like the fat little troll hiding under the bridge.