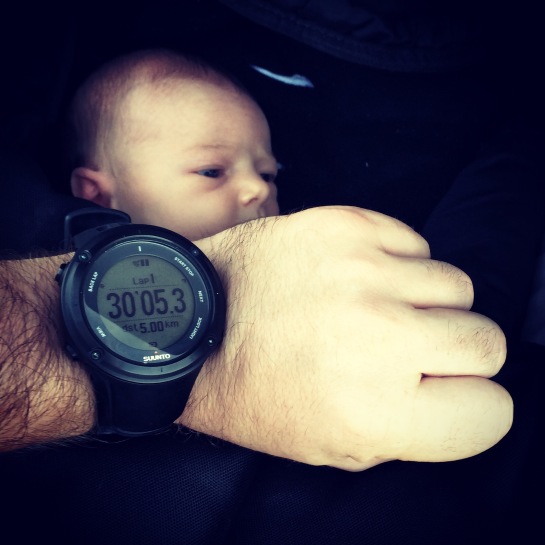 My comeback from injury had been curtailed in the most part by my ongoing hamstring problems, I’ve brought back my training to a minimum and built my focus on strengthening and stretching the various affected areas. In practical terms this has meant much more cycling (about 120km per week) and about 30 minutes of stretching and physio ordered exercise with the occasionally doff of the cap to running (such as last weekends Les Witton 10 mile or running with UltraBaby- see picture above).

But the problem today isn’t injury the problem is that I just can’t quite shake this illness I’ve discovered I’m suffering with and its called The Running Bug.

Are you a sufferer?

Here are a few of my symptoms

1. You are grumpy when you don’t run
2. You buy new kit when you can’t run
3. You get green eyes when you see runners go past and you aren’t running
4. You enter races in the hope that you’ll be fit and well, despite all evidence saying you won’t
5. You turn up on race day and tell yourself you’ll run it off
6. You suffer with magpie-itis when you see other runners medals and wonder whether it’d be easier to steal their medal or just the race next year
7. Your sense of style eludes you as you go to work often missing key items of clothes such as thundercrackers or consider it acceptable to be sat there in neon all day.
8. ‘Normal’ people think you might have the kind of mental illness that requires therapy to cure you of spending hours and hours on a road or trail
9. You’ve stopped giving a flying fuck what anyone else thinks about anything (particularly running)
10. You often suffer with a rash round your gonads (that might just be me)

You may not suffer with all of these, infact you may not suffer with any of them but while I’ve been injured and on the comeback trail I’ve had almost all of the above – so much so that I’ve already signed up for two more ultra distances this week. If you suffer like I do then consider yourself lucky because running is just plain awesome – which makes you awesome and I’ll see you out there this weekend awesome runners.