This is a blog post that pains me to write but because I’ve written glowingly about the Altra Lone Peak 3.0 but feel it is important to provide an update to a problem encountered with my favourite running shoes.

Let me give some context to this post, I’ve purchased three pairs of Altra Lone Peak 3.0 (from Running Warehouse, London City Runner and Northern Runner).

The pair I coveted most were the burnt orange option (Running Warehouse) as I find Altra send the muted colours to the UK which doesn’t fit my running tastes profile.

I fell in love the moment I put them on and more than a couple of hundred kilometres in and I remained in love. It was at this point that I wrote my comparison review of the three main Altra trail running shoes. I couldn’t praise the changes enough, better fit, more robust, interesting design and a polish that had been missing in the 2.5 – these were brilliant.

The other two pairs (bought from independent UK retailers) were saved for racing as I train in Inov8 and On Running shoes mostly. Therefore I went to Haria Extreme with shoes that had just 3 miles on them. Thankfully unleashed on the Martian like terrain the LP3.0 returned nothing but notes of joy as they sang across the race.

The morning after the race the day before: The day after the race though as I was performing my post race kit clean up I noticed that the toe bumper had come loose – this was unexpected. A total of 85km had been done in the shoes and that didn’t seem much. However, if I’m honest I was more interested in having a nice post race holiday and so packed them away (individually wrapped as ever) and thought no more about them.

For my final races of 2016 – Mouth to Mouth and the Mince Pi – I use older shoes like my Inov8 Race Ultra 290 and Lone Peak 2.0 which have lots of life in them but aren’t in my normal day to day shoe rotation so the LP3.0 stayed packed away well into the new year.

Therefore when 2017 did come calling I still hadn’t given my LP3.0 much consideration and it wasn’t until MIUT rolled round in April that I got them out again to run in.

However, looking at the damage to the toe bumper made me concerned about how they would protect me on the steep descents, more importantly might this damage provide a hazard during the more technical sections?

Being positively minded though I assumed that I had simply had one bad pair and decided to unbox my third pair and rocked up to MIUT in them. This time I was quite aware of the possibility of problems with the shoe and therefore was keen to keep an eye on them. With MIUT though the course was so ball breaking that I soon forgot to check my shoes.

It wasn’t until 50km in with daylight creeping over the horizon that I thought about my footwear and as I was shedding my night time kit and reworking my pack that I noticed that the toe bumper had started to work loose on a fresh out of the box pair!

Not cool. Not cool at all.

It was a massive disappointment because the shoe was so incredibly brilliant as it worked up and down the trails – such a tiny thing was going to ruin my experience.

Three pairs of LP3.0 and two of them failed within 50 miles and while some might argue that you can still use them I don’t feel you can use them for some of the nastier technical trails I was running earlier this year.

What next? I contacted Altra and their care team to tell them of the failures I had experienced, noting the distance I’d run in them, the terrain and as much other information that might help them provide a response.

The care team wrote back swiftly advising that they take this kind of thing seriously and hope that feedback can inform improvements later down the line and that I should in the first instance contact the people I bought the shoes from, which seemed perfectly sensible.

I very much appreciated the response from Altra USA and the reply struck the right tone for a brand on the way up.

Sadly none of these seemed to be the case as I was fitted by Altra people for my Lone Peaks, they’ve never been in a washing machine and neither Madeira or Lanzarote were in extreme temperatures (24-26 degrees).

Northern Runner simply replaced them after seeing the damage on a series of photographs I supplied but because I’d lost my receipt and it had been many months since I’d purchased them it was more difficult for London City Runner – although the Altra supplier did say they would see what they could do*.

I’d like to stress the point that you really can’t fault the customer service, support or help in trying to find a resolution. Altra, Northern City Runner and London City Runner should be commended for dealing with me quickly. Though, it should be noted that it wasn’t replacement footwear that was at the forefront of my thinking, I just wanted to understand if there was a known issue.

The £115 a pair question! The crux of the issue and the thing I couldn’t get an answer for was ‘is this a known problem with the LP3.0?’

Understandably nobody seemed keen to answer this but if the shoe is prone to this particular failure then I simply won’t buy them anymore as at £115 for 50km running that’s a very expensive shoe.

So the question now being posed is ‘Has anyone else had this problem?’ I’m interested to hear if others have faced this issue or other problems that I’ve been lucky enough to avoid.

The next version? I live in hope that the Lone Peak 3.5 resolves this very minor but hugely inconvenient problem as I’m an Altra fan and a big advocate for giving them a go. I don’t want to start looking around for new brands – it took me long enough to find this one. And in truth despite the durability problems the Altra Lone Peak 3.0 is a buggeringly good running shoe.

So Altra, get it fixed, I’ve got trails to conquer! 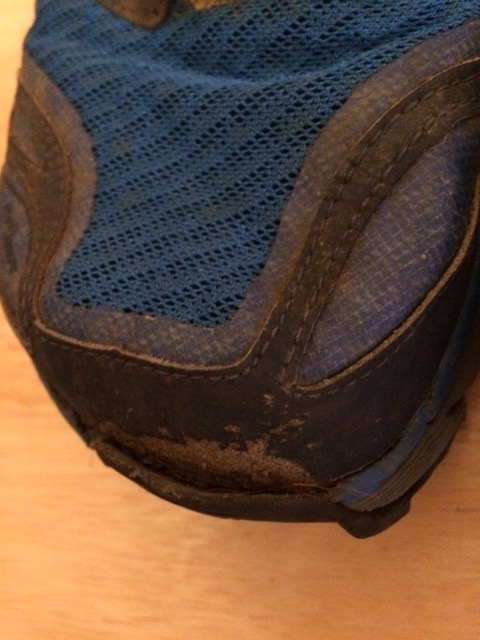 *Despite good initial conversations I never got round to visiting London City Runner and returning the original shoes to solve this issue as I got caught out with bouts of illness, injury and racing! Very much my own fault and I would very highly recommend all the retailers mentioned in this post.