However, this post looks to celebrate the ones I’ve found the absolute best and if good race management and strong organisational skills are your thing then maybe you should consider these guys 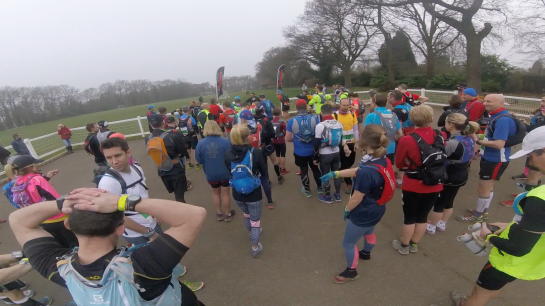 I’d heard so many good things about XNRG that I didn’t think it could possibly be true. However what I noticed about my running with them was how they had managed to absorb all the ‘friendly’ elements of small, local races where everyone knows each other and scale it up to ultra distance. I recall arriving into the Amersham Ultra and everything being in the right place, it was in a great location and everyone knew what they needed to do and outwardly they showed no stress. Anecedotal evidence from others who have run with them confirm that is pretty much the case all over an XNRG event.

I ran the St. Peter’s Way in 2014 and it has long left a lasting impression on me – this is partly because Lindley Chambers is a rather unforgettable chap but there were other reasons. I recall rocking up to the SPW and bumping into Ian Braizer for the first time since we’d both crashed out of the Thames Gateway 100, lining up for an actual kit check and a race briefing that felt more like being told off. However, the pre race organisation was on point and the marshalling crews across the course were absolutely outstanding and often old hands at the ultra game. The aid stations were spot on and it all ran with a kind of military precision. There is much to admire about the way Challenge Running do races and if you’re looking for tough, well thought out, well executed but ultimately achievable adventures then they are well worth a look.

There are people who might (justifiably) suggest that organising looped events is relatively straight forward. 1 aid station, a few direction signs and off you go. I tend to believe that the reason this opinion exists is because race organisers like Phoenix and Saxons, Vikings & Norman’s make a difficult task look easy. When you roll up to a SVN event you’re treated like an adult, Traviss and Rachel are both hugely experienced runners who offer sage words of advice and an understanding of what motivates runners (distance, routes, cake and medals). The SVN events are always a joyful experience and the organisation is the right balance of knowing you’ve got a reasonably experienced group of attendees and the need to ensure nobody gets lost.

The looped nature of the events means aid stations are never far away and the you’re never more than a few hundred metres from another runner who will offer moral support if you’re in need. SVN has community spirit written all over it and this combined with good routes, excellent aid stations and wonderful race directors make this an easy choice to run.

If you’re running in autumn or winter, if you’re running up Scottish mountains and if you’re unsure what you’ve let yourself in for then you really want to ensure that the organisers of a race have got your back. Find Your Adrenaline who organised the Ultra Trail Scotland: Arran race proved to be the best race organisers I’ve ever come across. I attended the inaugural event and saw a small team of race organisers bringing together two very different sets of runners (many who had come from Spain and the local runners). I witnessed the organisers going through the route in a variety of languages, the pre race meal was amazing, the support we were shown in putting an easy roof over heads was brilliant and then getting everyone to the start line was a very simple no fuss affair. There were no bells, no whistles, no silly gimmicks – this would be a hardcore race and it demanded the best of its organisers.

We’d been given GPX files well in advance, we’d been talked through the trouble spots on the route and as we all made the climb to Goatfell and light was coming up I think we all felt well supported and like this was going to be a great day out. When race director Casey Morgan though started sending runners back because conditions were so bad this was proof positive that safety was foremost on the minds of the organisers. Nobody could blame him or the rest of the team – nature can be tough. The brilliant thing though was that the support didn’t end here, once we had descended the mountain the team kicked into action and provided food, drink and anything else we could want. I have nothing but the highest of praise for the team under extremely difficult and disappointing (for them as much as the runner) conditions. I’m glad to see they didn’t see this as the end and if you fancy a real challenge then you should consider a crack at Arran this June. 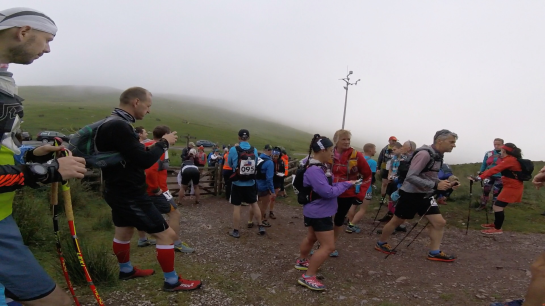 Organised, friendly and well thought out are how I’d describe the Run, Walk, Crawl experience. Because of dropping down to the SW50 from the 100 I had a bit of time to kill and so joined the support team handing out numbers and registering runners. This was an awesome experience and sitting behind the table was almost as much fun as the running. The rugby club that the organisers had hired out was a brilliant location as it meant we had hot showers (pre and post race), somewhere to change and a decent place to camp too. There was a town and a train station a short hop away and it meant that the runners had access to everything they might need. Race morning saw coaches laid on to the start and it all felt easy (which as the runner is something you only appreciate if something goes wrong). On the course there was great support from the crews, food and drink options were plentiful and the route even passed a Co-op for an ice-cream stop (truly something for everyone).

I don’t do many mass participation events because I simply don’t enjoy them and feel that they get far too much coverage (looking at you London Marathon). However, the SainteLyon with a total of 14,000 runners over 4 different distances is an exception I make.

The race is a bit of French classic that has been running for over 60 years but despite this the race remains reasonably anonymous in the UK and English speaking countries. And so to why I would consider Extra Sports do brilliant at race organisation, the first is the language barrier – many of the volunteers and staff are well versed in English and other languages, but that isn’t the pleasant surprise – the surprise is the fact that many can spot you as a foreigner before you’ve even spoken and are incredibly helpful. The rest of my experience with Extra Sports and the SainteLyon was equally well organised – the main hall were registrations take place is split between the race village and the number hand out. Identity checks are swift and number allocations equally so but it’s a very human process despite the number of people involved. Then there are the logistics are transporting thousands of runners to the start line, returning bags to the finish line and ensuring that everyone is suitably comfortable, fed and watered in the run up to a race start at midnight in the middle of December. Extra Sports go the extra kilometre.

On course it’s the same brilliant event management – in the icy unmanned sections there are quad bikers going back and forth to help runners who might be injured. Last time I saw a runner being airlifted out (I assume due to injury) and every care was shown here. Aid stations despite being incredibly busy were never once short of food or drink and the people manning these incredibly busy aid stations looked like they were working harder than the runners. Truly epic efforts, truly brilliant.

Best things: Organisation of transport for a shedload of runners, really well considered logistics at start and finish.
Website: www.saintelyon.com

Ultrarunning Ltd, organisers of the Green Man, Malvern Hills and the Midnight Express to name but a few boast a fine reputation for fun, inventive and inspiring ultra marathons that you always fancy a second (or more) crack at. My first experience was a mud soaked bumble around Bristol known as the Green Man Ultra. We were lucky I think that we had a fine day for it which allowed runners to congregate outside the main registration hall. Numbers/colours were allocated according to your distance (30 or 45 miles and whether you were being fed on route or not) a theme that continued into the medals as well.

Once off I found that the course was easy enough to follow and you were never very far from another runner despite the relatively small field. What was a surprise was just how delicious the aid station food was – including the delightful jam butties! The crews were plentiful for this one, this meant that no runner was waiting around for very long for a cup of tea!

I rolled in reasonably late from this one but that didn’t stop there being a tremendous reception and more importantly there was still some of the truly delicious chilli remaining! (a common occurrence when you’re not at the front of the race is that post race food has often disappeared – but not here). Facilities at the end were ace and the lovely certificate I was presented with (with my name written and spelt correctly) was a genuinely lovely finishing touch. This race, the experience, the organisation and the medal will long be remembered

Obviously there are lots of other incredible organisers of races, Vigo Running Club and Harvel Hash Harriers who put together the Tough Love 10 are outstanding, the chaps behind the Marlborough Downs Challenge are incredibly well organised and I’ve rarely met any organisers that have done a bad job. You’d certainly be assured that all race directors go into these things to provide great race experiences because making money isn’t the reason you do it and they want to most of all make sure that you all get round safely having had a load of fun.