I’d suggested to the GingaNinja that she join ASK and I on one of our little adventures. The specific adventure I selected was ice skating, now I can already hear the sounds of disquiet, ‘ice skating with a two year old? It’s preposterous!’

Well yes, which is why many of the rinks have limits on age (usually about 4 years old). Thankfully one of the local seasonal skating options, Ruxley Manor was open to children of all ages under the appropriate ‘adult’ supervision. Now while nobody is going to mistake me for an adult… well you can see why the GingaNinja was included in the outing.

As we approached the rink ‘Gangam Style’ was belting out from the speakers and ASK and I hit the afterburners for some dance moves. 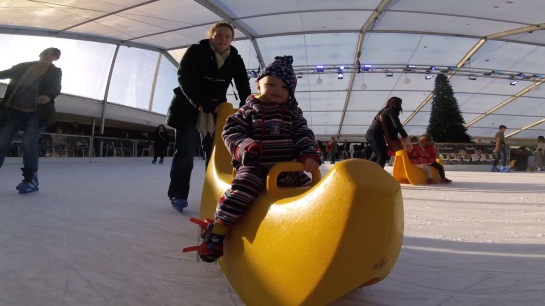 We had a little bit of time to kill before we were to head to the ice so we ambled around the rather delightful garden centre that is Ruxley Manor – ASK enjoyed roaming around shouting at the top of her voice ‘Pissmas lights dad!’

We headed over to grab our prebooked skates at about 10.45 and there was already a little queue but it was little and a lady who was prowling the waiting skaters with a clipboard came over to take our name and confirm our booking. a minute or two later we were given our skates, deposited a bag and were given a pair of skating overshoes for our two year old. Much to our surprise the overshoes actually came down just small enough for ASK but it was a close call. 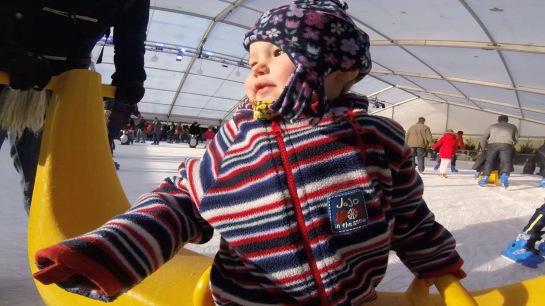 We had also booked a banana skate support for ASK so we could whizz her round the ice at full pelt and as we gingerly got on the ice (it had been a little while) I remembered that I was really nervous about pushing my daughter.

The rink was busy but not rammed tight and so ASK and I set out for a few laps of the rink, faster and faster I ground my skates into the ice and discovered that the banana boat made things surprisingly sprightly. ASK sat nearest to me at the back of her two seat carriage and we weaved in and out of the less experienced skaters. Soon we were adopting the guise of skilled participants, spinning and speeding around the course, ASK screaming with delight as she urged ‘faster, faster’.

The GingaNinja and I rotated between pushing and supporting but despite my Ultra marathon less than 24hrs previous it was clear I was going to be on primary pushing duty – this was made abundantly clear when the GN and ASK both took up residence on the banana sleigh.

ASK weighs about 13kg, the GingaNinja weighs a little more and so as the music blasted out Mariah Carey or some other god awful Christmas tune I set off with my fully laden sled.

Rarely have I had this much fun, I armed the GingaNinja with my GoPro to capture the moments as I put all my power into skating and controlling the sleigh, attempting to avoid carnage. Again we pushed through the crowds and sped faster and faster round. ASK continued to grin wildly and scream often in delight.

We decided that ASK should try her hand at the ice while we had the opportunity and so we placed the sleigh to one side and allowed her to stand unsteadily on the ice, holding our hands. Within a few minutes she was shuffling along in her own little corner of the ice.

With everything achieved on the ice she jumped back on the sleigh for a final 10 minutes of bombing round at high speed – as the ice was now clearing a little bit we were able to get more clear space to go even quicker. I watched as a fellow parent and child performed tricks and immediately followed suit, much to the delight of my little one.

But much too soon it ended and we were called in off the ice, ASK and I could happily have carried on for hours. 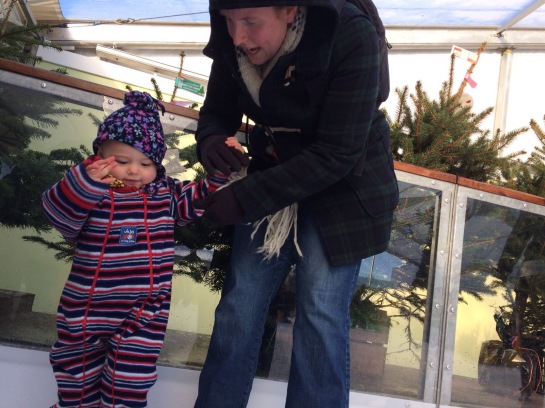 Conclusion: skating with a 2 year old won’t be everyone’s cup of tea and not every 2 year old will enjoy it. We thought we might have managed 20 minutes before she go bored but thankfully she lasted the full 45-50 minute session. Important to say is that Ruxley Manor is a nice rink, well organised with a drinks counter and a nice restaurant for post skate eating. The price was as expected about £10 per adult, £5 per child and £5 for the sleigh, expensive but in line with similar experiences (prices vary on when you attend). It’s not a daily thing so the expense is fine and if I wanted a more ‘skate’ experience then I’d go to Broadgate near Liverpool Street but as a family ice skating experience this was pretty brilliant.

The rink is open until the end of the festive season. Get along there and have done fun.