‘I think I need another race,’ where the unlikely words to come out of the GingaNinja after the Mince Pi Run. It’s not that she has suddenly become enamoured with the idea of running or racing its more to do with the need to be healthy and a healthy example to ASK. With that in mind I found the Lamberhurst 5km event on New Years Day – a little road bimble that I had imagined would be a nice and easy leg stretcher. Let me assure you readers that the Lamberhurst event (the 5 or 10km) is no easy bimble but it is a shedload of fun – this is what happened… 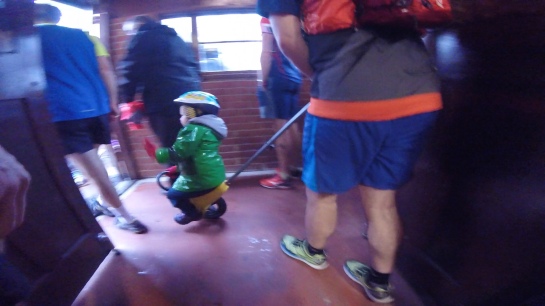 Living about 30 miles from the race start I decided to use the opportunity to practice my driving along the country roads of Kent and with the rain being heavy this was going to prove a big challenge for someone who finds the idea of driving a nerve shredding experience. Thankfully I pulled into Lamberhurst at about 9.30am just as Google had predicted with all three of my runners intact.

Our GingaNinja inspired attendance was supplemented by myself and ASK for a 5km party of three. We ambled along to the village hall where I got a sense that the route wasn’t as flat as I had imagined… hmm. Still we grabbed our race numbers, a toilet stop and then waterproofed ASK (as she would be ‘running’ on the Unirider offering inspiring words to her mum) and soaked up some of the post New Years Eve cheer that clearly was still in the air.

As is often the way at races where ASK runs with us on the Unirider we receive lots of attention and this was no different with many of our fellow runners wishing us well or offering a cheery nod to ASK – something that I believe makes the experience much more positive for my toddler. 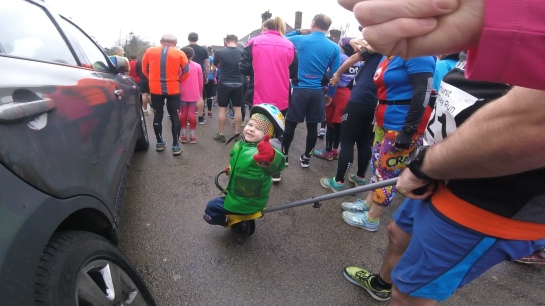 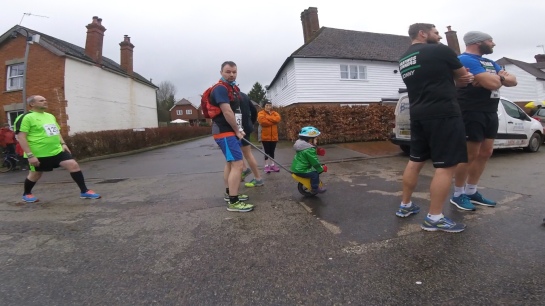 At the start line we chatted with more runners even as the rain began its downpour! ASK advised that she was getting wet but I promised that we would soon be running and wouldn’t notice the rain. At least half of that was true and we soon set off with the GingaNinja a little behind us.

The first challenge was a wonderfully steep hill and we shouted encouragement to the GN to keep on going as the hill got steeper. ASK and I powered past people and reached the first section to flatten out and gave the GN a chance to catch up, but our respite was short lived and we were all soon pushing onwards and with the field clear of the faster runners we could trundle happily along in the wet conditions.

ASK and I weaved in and out of the route and the remaining runners as we headed downward and back toward the village hall, giving the Unirider a real race test on the tarmac rather than the trails we normally run on.

Straight from the downhill though we entered our second significant climb but the GingaNinja had paired up with one of the lovely runners and I had got chatting to a lovely chap called Kev who like me had a youngster and was a Mountain Buggy user for taking his son out. Of course we chatted about the Unirider but also general running and this helped make the event much more fun for all. Of course ASK and I circled back to ensure that we all stayed together – this was very much a family race – and we continued to shout encouragement as the race progressed.

As we entered the next downhill we went a little quicker but my problem was that the heavy rain had stayed on the race course and ASK was getting mildly wet feet, actually very wet feet – thankfully like the superhero she is she didn’t complain and we thundered down the hill being greeted by the returning runners from the turnaround point.

We passed through what looked like a country house at the turning point and passed a grandfather and granddaughter running together – both looking brilliant and I used the young lady as an example to ASK of what she could be doing if she carries on being active. ASK was excited by this as the girl was almost all in pink!

The final climb was also the most challenging given the water on the course and its steep nature but both myself and the GingaNinja gave it our all and I suggested that we would wait at the top of the hill for her (and shout out support of course). I wheeled in behind the lovely marshal but had made a minor miscalculation in my turning circle and ASK fell off the Unirider for the first time. Thankfully we were almost stopped and no harm was done other than some wet gloves and a bit of a shock. There were also a few tears and so I cuddled my awesome little daughter and said, ‘don’t tell your mum’. She replied with the, ‘alright dad’ and jumped straight back on. However, her hands were now cold and with the rain still heavy she wanted to finish.

I told the GingaNinja what had happened and all credit to both of them we sped up to get back to the warm as fast as possible. The downhill was fun and I think we all enjoyed the run into the line with people cheering my daughter in and I heard the GingaNinja gave her name called out.

We finished and collected medals (mine immediately becoming the property of ASK) and headed indoors where we stripped off and put on warmer kit. What a belter! 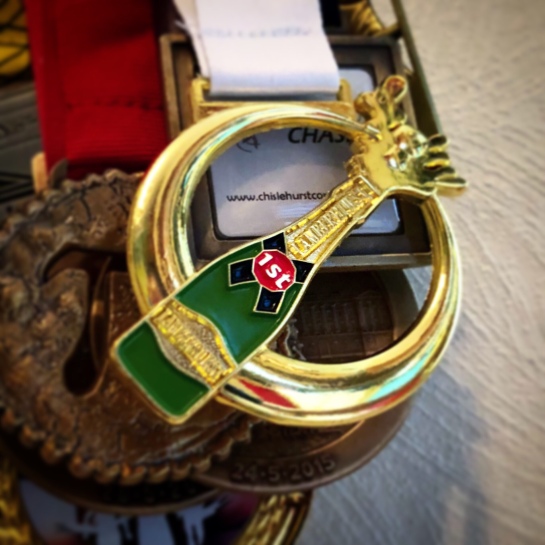 Conclusions: Incredibly family friendly, lots of youngsters doing the child’s race, lots involved with their parents and grandparents in the main race. A nice, warm village hall at the start and a really, really fantastic route that could be as fast or as sedate as you wanted. The Lamberhurst races should be everyone’s start to the year and with the opportunity to grab a wonderful medal who wouldn’t want to do this on a wet New Years Day? Another great event from Nice Work and thanks for letting ASK take part with the Unirider, we are very grateful.