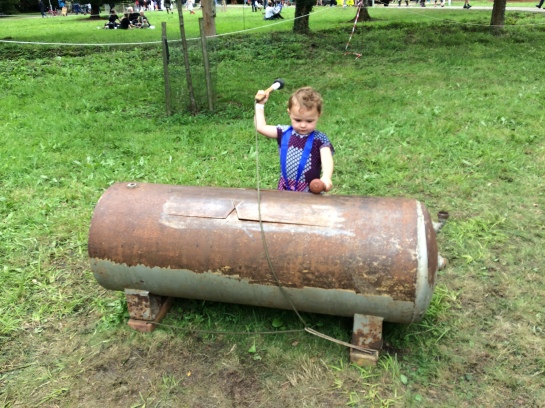 As the summer comes to a close I can say that I’m a very fortunate fool, I’m pretty healthy, pretty fit, with a very silly family and mostly, I get to do the things I want to do. This summer allowed me to return to two festivals I haven’t been to in several years – WOMAD and the BBC Festival in a Day. In previous years the GingaNinja and I have seen some amazing performances such as Mama Rosin, Robert Plant, Lenny Kravitz and even the mighty Status Quo!

This year was a little different, this year we had ASK along for the ride – now it’s true that it’s not her first festival as the GN and I at 7 months pregnant took her along to the Hop Farm in 2014. It was here we believe she cultivated her love of James Blunt and gave much kicking dance action to both Sophie Ellis Bextor and the brilliant Paul Heaton and Jacqui Abbot.

However, it would be nearly 3 years later before she got the chance to experience all aspects of festival life and we decided that WOMAD was a good place to start.

We arrived early on the Friday morning to a relatively packed campsite and therefore had to park a little way from the camping. However, armed with a pull-a-long trailer we piled everything in and headed up to a relatively quiet, top of the hill spot. WOMAD is a well drilled festival and we were never far from either water, decent toilet facilities and warm showers.

We had hoped that the weather would remain dry as this would keep our options open for what music to listen to but when it didn’t we decided that staying a little drier would make for a better experience with ASK. Over the course of the three day festival we saw some amazing acts from ‘World Music’ Trad.Attack! from Estonia playing amongst other things the bagpipes were a real treat. The Gubi Family (Beautiful), Goat (reminded me of Orbital), Las Cafeteras (brilliant), Benjamin Zephaniah and the Revolutionary Minds (Inspiring) and The Ska Vengers (Cool). For me though the best thing I saw was Kuenta i Tambu who brought a level of energy to the stage that I hadn’t seen in years, it was bring powerful Afro-Caribbean music that really made you want to get up and dance (and we did). WOMAD had such a hugely diverse range of music on offer and although you won’t like it all you really won’t struggle to find something that you do like.

Importantly ASK found much of the music to her tastes and we danced to the fast moving, beat laden tracks and we snoozed through the gentler music. Although we went to WOMAD for us, we wanted our daughter to experience live music and the energy that comes with it and thankfully she loved it. 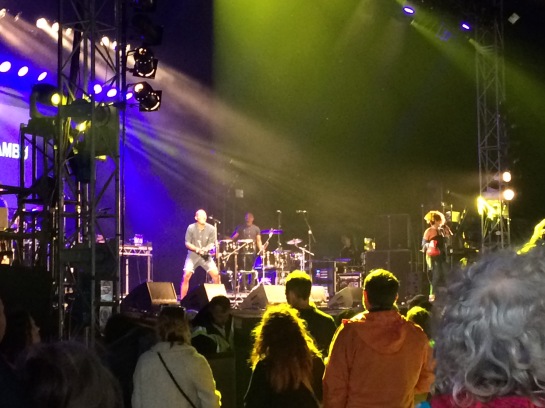 We found the use of a trailer meant we had a mobile bed for ASK and added large umbrellas to keep her dry if it rained. This was perfect for when she grew tired it meant we could stay out and she simply snoozed until she was ready to party again. What we didn’t take was a buggy and although many did they might have regretted it once the mud got thick – we chose to transport ASK on the Unirider when not in the trailer as this handled all but the worst of the conditions with great aplomb (and as we sped around the arenas we were much pointed at, talked to and even photographed – weird).

WOMAD though is much more than music it’s an environment of creativity, play, education and experience. Each morning we sought out the children’s world and joined in with the many wonderful activities on offer. We made masks, hats, skirts, created patterns in t-shirts (£4 for the shirt, a real bargain). We sculpted clay, played numerous instruments, engaged in group games and had several interactive story times – ASK had so much fun! 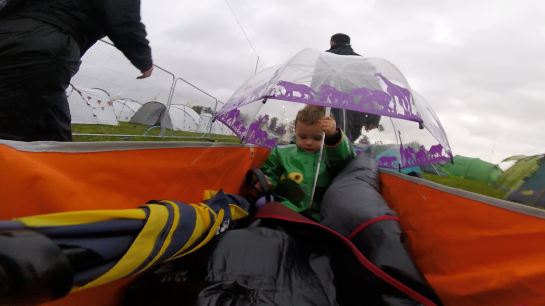 The food was almost universally excellent too and although we did some camp cooking you really don’t need to – we had the delight of trying lots of delicious foods and the raclette was amazing as was the mac and cheese we tried and the plethora of cakes, coffees and treats we tried were all delicious. Pizzas offered a good and easy option with prices generally being reasonable for a festival. WOMAD scores well for its food options and have certainly improved since our last visit in 2012. As a teetotaller I don’t drink but the GingaNinja did try some of the ciders and exclaimed that the Mango Cider was her favourite of the whole festival!

Ultimately WOMAD is highly recommended on all levels and while some would argue that it’s a bit of a middle class event I’d argue against that. They do their very best to be hugely inclusive, ASK didn’t pay to attend and you can pay in instalments for adult 3 day tickets and there are options around this. WOMAD has a wide range of music and although nothing you’ll get on Radio 2 it offers you a chance to learn something new. The craft, poetry and children’s sections are phenomenal and as a family experience you really can’t go wrong. I’ll certainly be going back and I won’t be leaving it 5 years between visits!

We adventure a lot with ASK – running, biking, hiking, climbing, ice skating, parks, cultural trips, educational trips, parties and that other good stuff but we knew that camping would be something we should be better prepared than usual for. There may be some useful tips in here for new parents about to embark on their first camping trip or music festival. 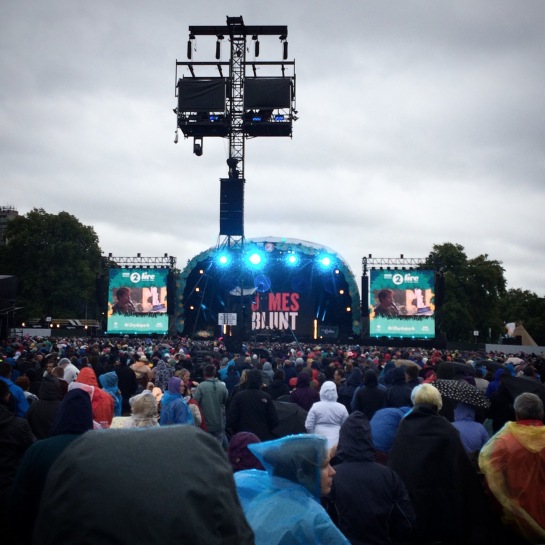 BBC Radio 2 Festival in a Day

Our second festival of the year was the BBC Radio 2 Festival in a Day. A very different beast to WOMAD but no less enjoyable. A few months back I’d seen that Blondie were on the bill an having just bought their new album decided I’d like to see them live as I’d always been a fan. Looking further down the list I saw James Blunt, Shania Twain and the wonderful Take That. I urged the GingaNinja to make sure she had all the computers in the house ready and armed when the box office opened and after much effort we secured a couple of tickets! Ace.

Having been a couple of times before we knew that it would be hectic and that food outlets would be rammed and so decided to take quite a significant picnic to ensure that both we and our toddler didn’t suffer from any food outages! Armed with a picnic blanket, buggy and food we got to Hyde Park with a couple of hours to spare but this was soon eaten up by finding a decent spot, lunching and getting comfortable. 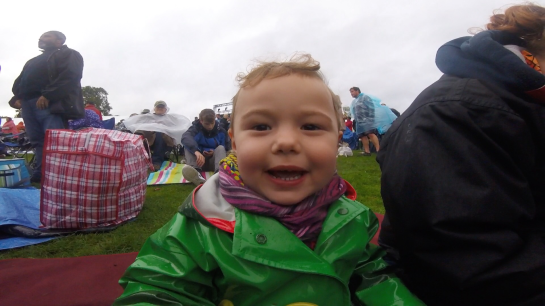 The weather was looking a little ropey too and we prepared our ‘camp’ for it getting wet later on. By the time the Stereophonics opened we were all in the mood for a little dance and the band delighted as they smashed out new and classic songs. The remainder of the afternoon rolled on without much disturbance, the Radio 2 team bringing truly global musical talent to the stage for everyone to enjoy. It all started to ramp up though when Rick Astley appeared and from here on it was simply a succession of bigger performances. James Blunt was brilliant as ever and I delighted at his live version of Bonfire Heart which I sang to ASK every night for the first two and a bit years of her life to help her sleep. Shania Twain was much as you remember her and delivered a magnificent reminder of her heyday and potentially a return to huge success. ASK, the GingaNinja and I bounced around all day to music as it belted out around Hyde Park with the child periodically requesting the opportunity to sit on our shoulders for a clearer view of the action. 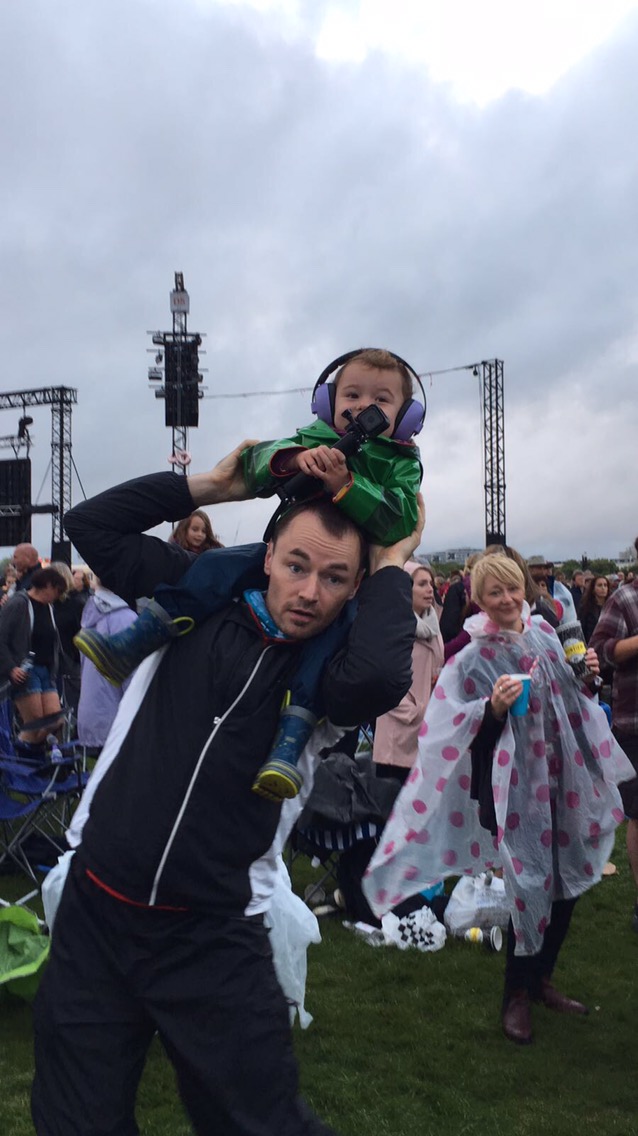 When Blondie came on though ASK recognised and appreciated the pop rock that she’s been brought up on and we both danced for all we were worth! For me Blondie was the absolute highlight of the day but credit where it’s due Take That gave them a real run for their money.

With a 9.30pm (ish) finish/curfew this compressed festival makes the most of its family friendly credentials. The toilets are decent, it isn’t too overcrowded, it’s fairly priced at £50 for general admission and the music has all the toe tapping hits you could wish for. The biggest concern are the stupidly long queues for food and drink but by the food being within earshot of the music the organisers get away with it (just).

Ultimately the Festival in a Day is a wonderful experience and if you’re within spitting distance of London, love the music of Radio 2 and don’t mind the potential of getting wet then it’s a no-brainer!

And so… as parents what we learnt was that ASK loves music, lots of different music and being around these big events. She had no fear of the scale of it all and simply did her own little thing (singing ‘the wheels on the bus’ for example while the stage was blasting out pop classics). The most important thing in terms of enjoying a music festival with a toddler is to be prepared, it didn’t take much effort to get us ready for either event but doing our research and adequately readying ourselves meant that everyone had a brilliant time.

And will we go and do more festivals with her? Damn right we will!