It’s been a weird week, I’ve had so few hours sleep that I can barely see straight, I’ve been working round the clock to meet my commitments at work and to get ready for job interviews in preparation for a move Scotland. Too this add the last ten days being dedicated to the final part of my beloved Spaniels life and well let’s say it’s not been the easiest period we’ve ever had. Theres been no running since the 28th January and to be fair I just haven’t felt like putting on my shoes and getting out there.

The problem was Vigo, my favourite race, my favourite route. However, I really wasn’t prepared for it physically or mentally. With every new thing that layered itself in life outside running pushed me further from the start line. However, when ThunderPad died I knew running Vigo would be a fitting tribute both to him (he loved mud and that part of Kent) and to pay homage to a race that I might be running for the final time (Scotland is a long way to come).

Seems I’d sold it into myself – back to the Vigo Tough Love 10 mile(ish).

Let’s briefly discuss the registration process which had a few issues. It seems the database and the numbers were the wrong way round – it was an admin error and I hope that anyone who ran it could see that guys worked tirelessly to get things working. Yes we started 40 minutes late but that time allowed the organisers to get on top of everything and also for the runners to get better acquainted. Stuff happens and these guys really pulled it out of the bag to get us running. Well done chaps.

I can save you the trouble of reading further and say, oh yes! You’ll never have more fun in your life than doing this tremendous race! 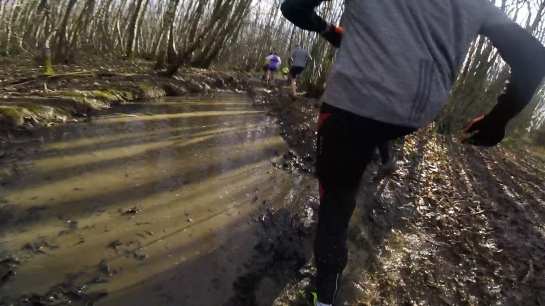 But the devil is always in detail and this is why it’s still my favourite race.

After the organisers had managed to successfully get everyone through the registration process we were mere minutes from starting. I took up my customary position at the rear and when the sound to go went off I slid my way forward with the other foolhardy souls.

The amble around the rugby field is an opportunity for some to burst forward, usually those who have never run it before or those going for the win. I was quite happy sat in the middle of the pack enjoying watching the surroundings go by. The thing about Vigo though is that if you let it then it will bite you on the bum and as early as the first leap over a log you could tell conditions would be treacherous but runnable. 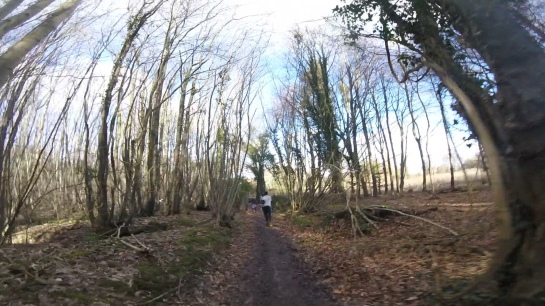 The rain earlier in the week had sat heavily on the course and made the top layers of mud pretty damn slick and as I looked to avoid the worst of the first puddles I realised this was going to be futile and so sank my foot into the thick wet, muddy water. Woohoo I thought as I felt the freezing cold water pass through my Terraventure.

Splish, splash, splish, squelch, squerch I thundered across the ground watching the runners ahead of me and seeing the sections I should avoid. The good thing about going through the water is that it is probably the most stable section of the course – yes you run the risk of losing a shoe or two but it’s quicker than trying to go round the edge. Despite a bad back, no sleep, a week to forget and the toughness of the route I was making pretty good time and I passed through the 5km mark within 30 minutes.

Parts of the route were also dry enough to run through more quickly and here I made up time for the sections were conditions had caused delay. As I passed the many wonderful marshals I offered my own assessment that they, ‘hadn’t made it any easier since last year’ but with the downhills kicking in it felt like I was making swift progress across Kent. It wasn’t much later – probably 8 or 9km in that I felt the last few weeks really catching up on me and when I hit a fast downhill I knew that I didn’t have full control of my jelly like legs – that didn’t stop me thundering down though but the big road climb in the route did bring me to a stodgy halt.

I stomped up to the top and the water point, wishing I was closer to the finish. I had fluids and a jelly baby followed by a stern talking to myself before I set off again – legs exhausted and a minor hamstring pull. As I pressed on I enjoyed the views and the slightly slower running. It was about 3km later when my Vigo running buddy caught me up and grabbed me from behind saying, ‘let’s get this done buddy’ but even as we pushed on together I knew that I didn’t have the legs – still that didn’t mean I wasn’t going to put up a fight. I flew with all the dignity I could muster through the downhill and into the next field but the sight of the final climb in the corner of my eye made me poo myself just a little bit and I said goodbye to Mick. 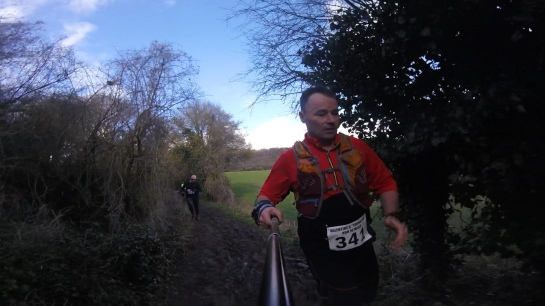 The final couple of miles are spent in the knowledge that you’ve got the final ball busting hill to ascend and in the distance you can see a slow and slowing procession of exhausted runners making the best of it that they can. I took my time getting there as I knew there was no way I was doing it quickly and when I arrived I had a little joke with the marshal before giving it about five seconds of thrust! I descended quickly into a slow death march to the top but strangely even though I was going relatively slowly it was pretty consistent and conditions on the hill were such that this was a reasonable ascent. Lovely. As I reached the top I muttered to both myself and volunteers, ‘four times I’ve done this! You’d think I’d learn. Never again’ – there was laughter.

Last year I reached the top and gave it some welly but this year I was in pieces – my legs stumbled to get back into position and once we were moving it was fine. I knew that I was probably less a kilometre from the finish but I wanted to finish strongly and so ambled casually into the undergrowth of the final few turns. Here I met a lovely volunteer who got behind me and gave me a push when I looked like I was about to give up and from here I hit the afterburner – leaping across the log and into the home stretch. In the distance I could hear the sound of Mick shouting out my name and there was a runner about a hundred metres ahead of me. I flew like my life depended on it to try and catch him but he crossed the line a second before me. My sprint finish wasn’t quite as brilliant as it so often is yet unable to stop I charged towards the volunteers – coming to a less than dignified stop some metres beyond the finish.

Caked in mud I shared an embrace with my long standing running friend Mick, his brother and also met his friend who described how he kicked on to take the race win a whole half an hour earlier than either I or Mick. Lovely chap and a very deserving winner.

Route: It doesn’t get any better than this, the first mile or two is absolutely amazing whatever the conditions – you’re flying or falling through the thick oodles of mud. It drains you, it feels heavy but with every fibre of your body you know that this is the kind of race you’re going to adore based on this first section. The rest is simply a succession of ball busting up and down with very little respite but what it takes out you it gives back 10 fold and more. If you love running you need to do this route, preferably in this race.

Organisation: No complaints – even with a bit of an admin error (for which they massively apologised) the team got on with the job and made it happen (and as far as I can tell the chip times look pretty good). I hope nobody thinks different as they really bust a gut to get the race underway as fast as possible. In other terms the race start, the execution of the on course support, the finish line and the pre race marketing and social media meant that actually the race seemed even better organised than ever.

A special mention goes to the wonderful marshals and volunteers at Vigo Runners and the Harvel Hash Harriers who make this happen. I know that some complained a bit about the muddy parking but let’s put a bit of a spin on it – there was free parking and there were awesome cadets and other runners who helped push out the cars when we got a bit stuck! This race had a real air of community spirit – don’t change a thing!

Awards: Pretty cool medal, Vigo also had something different, my first one was pretty generic, the others a little more themed – this latest one looks like it could be a sex toy (if you look at it in the wrong light! Ha). 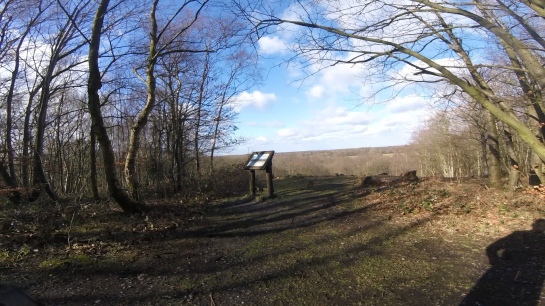 Conclusion: This remains my favourite race, the SainteLyon runs it so close but this has a place in my heart that just edges it ahead. The ten mile (and new 10km) distance mean this is a very accessible race. The route is hellfire tough, brutal in places but also super fast in others. It’s a race that can be whatever you want it to be and I hope this continues long after I have slipped off this mortal shell. Sadly my move to Scotland means I doubt I’ll be down for every running of this race but I suspect I’m not done with Vigo – my heart will draw me back. If you’ve run it you’ll hopefully know what I mean and be drawn back too and if you’ve never run it then you need to.

In memory of Thai: In my final words I’ll say that I ran this partly in memory of my beloved Spaniel who we lost earlier in the week – he loved the area and no matter how hard the race was I knew that if Thai were running alongside me (during a training run – race sadly not really suitable for Cani-X) he’d have been complaining that we weren’t reaching the next muddy puddle quickly enough. Thanks for keeping me going out there ThunderPad, miss you.