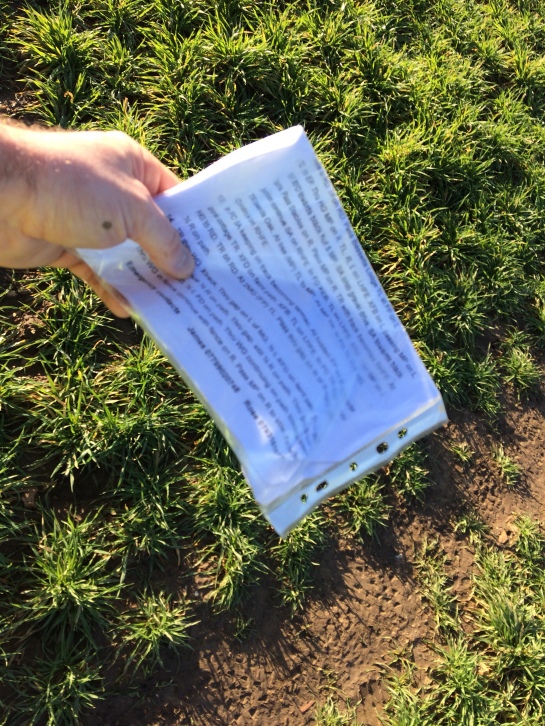 ‘Oi, you’re going the wrong way’ came the call, this I thought was going to be a very long day.

We’ve all signed up to races without doing our due diligence and that was very much the case with the East Hanningfield Marathon – basically it was coming to the end of 2017 I hadn’t got any races booked in and I didn’t really fancy a third round of Country to Capital – so I signed up for this. I did know that Top Day events had put on a wonderful little event last year at Hockley Woods and having thoroughly enjoyed that I assumed it would be much the same again.

The GingaNinja had agreed to take me and, with ASK in tow, was going to spend the day doing family things in Essex while I ran. We rolled up to the village sports hall nice and early and already a couple of dozen runners were chatting and milling around. I picked up my number, narrative instructions and pins then rejoined the family with nothing but thoughts a pre-race toilet visit to keep me on my toes. The day warmed up nicely when the lovely Rachel Smith of SVN events came over to say hello and then Rob Haldane who I hadn’t seen in an age confirmed he would be at checkpoint 2 – this was clearly going to be a friendly race. 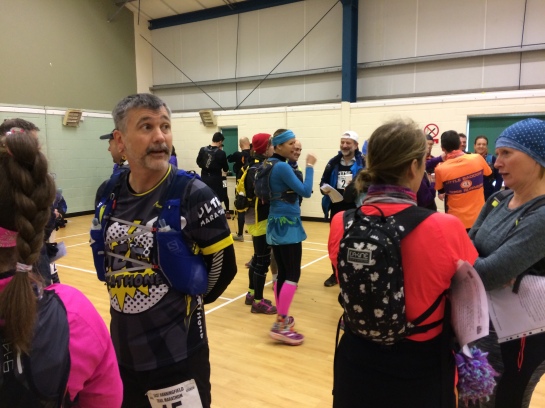 With the various greetings done and dusted I took a look over the narrative instructions – it had been nearly 5 years since I was last reliant on instructions but I hoped that my navigation skills had improved enough that this wouldn’t be a challenge – then I read then.

SA through WG WE with FLHS to FC through double WM KG but don’t XRD have LD in middle of RD wishing you were SWE having a POO not looking for a dog poo bin in a field followed by a BB but SA… it was a lot like that… Frantically I began trying to memorise the abbreviations and then read the instructions to myself but it was becoming a mess in my head and so I decided that I would ‘learn while doing’ and try and get to grips with the narration while moving. 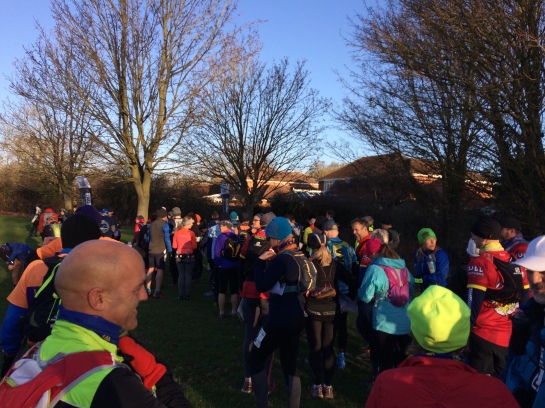 At 9.30 we all bimbled outside into the chilly January air and after a short racing briefing were sent off to find our way home as quickly as we could. It all started pretty well, round the field, follow the guys in front and keep up with the instructions. It had been a heavy training week as I returned from the post festive season lull so I was expecting to be running very slowly but I was merrily making my way through the runners and nearing the pacy ones at the front. This was as much to do with taking the first sections slowly to ensure they were going the right way as it was the sheer excellence of my running. 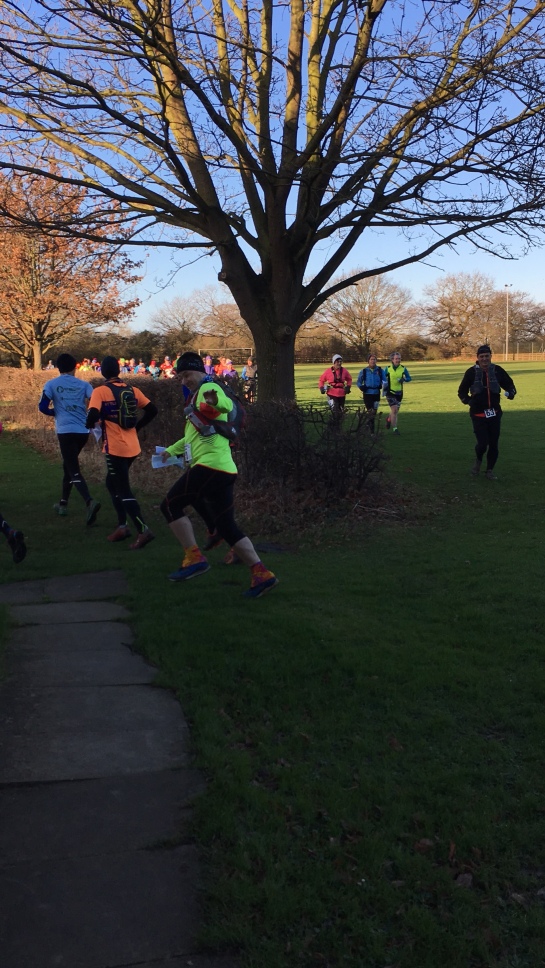 The course was incredibly damp but the heavy rains had dried up enough to make everything slick and therefore progress was slow but this did provide an excellent leveller for people like me who, though not fast, can be consistent regardless of the conditions. I had chosen my Topo Terraventure as shoes for this particular event and they proved an excellent choice as they cut through the worst of mud and by about mile 2 I was beginning to feel at home.

Of course when you feel at home is when your eye comes off the ball and then boom – wrong way. Thankfully I noticed pretty quickly but even so this was a mistake I could ill afford to make and quickly doubled back about 500metres to see runners making a sharp left turn. Others followed but perhaps the more sensible runners simply carried on and rejoined their fellow competitors a little way further up but I didn’t want to get into those kind of navigational mishaps and stick to my plan. 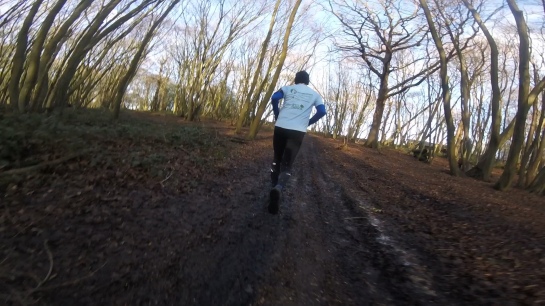 I used some of my reserves to push myself back into the middle of the pack and reasserted my credentials as navigator through the instructions and pressed onwards. The route passed across roads, fields and waterways and as always Essex provided visual treats whichever way you looked. There may not be mountains in Essex but it is a beautiful county and once you’re into the greenery here it’s spectacular and I remember thinking as I ran into the checkpoint that I really needed to remember to look up – take some pictures, etc. 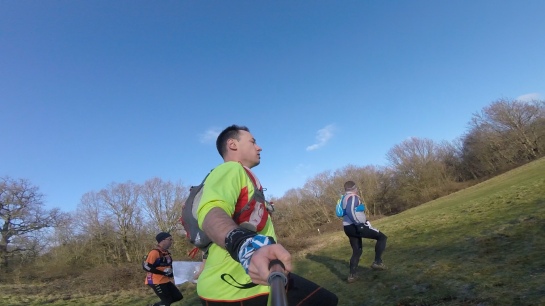 At the first checkpoint I stuffed my face with pretty much everything I could get my hands on and there was a fine selection of sweet and savoury treats and the very professional volunteering was much appreciated. With my self imposed three minutes being up I set off at a canter but dropped back a little from the chaps I had run the last mile with – they were clearly going to be right in the mix for a top ten finish – I just wanted to finish – though there would be a bit of back and forth with them on the journey to checkpoint 2.

It was here that I met Dave again, we had met briefly in the run up to checkpoint one but this time we made conversation covering by a bit of family and the like, others runners would pass by or we would overtake and there was a nice convivial atmosphere as the sun shone down and the cold wind whipped around us. Despite my generally good mood my legs could feel the burn during the second section and a lack of fitness aha mild over training in the previous week were catching me. Thankfully I was able to hold on to the coat tails of the runners ahead of me, this was now not so much a directional aid as an inspiration aid. 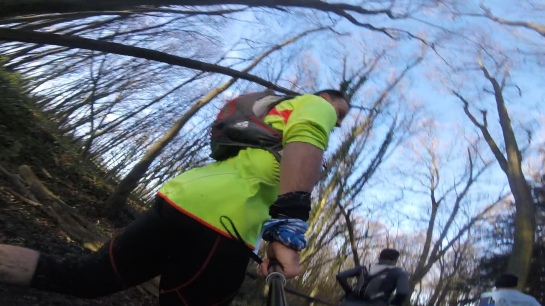 Landing into the second checkpoint brought me back to Rob and after a brief hello and grabbing as much food as I could Dave and I set off again. My companion and I while not attached at the hip trundled through the mud – never too far apart (though I’m very glad I wasn’t next to him when he lost his feet and took a tumble in some deep water – I didn’t want to bathe with him!) and from here we pretty much stayed around or about one another. 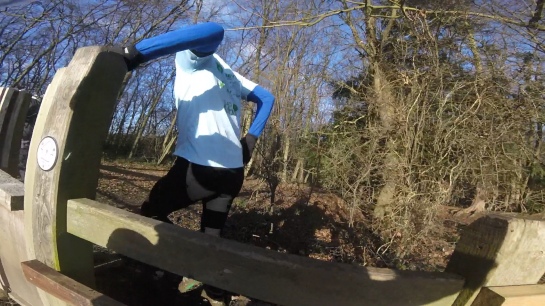 The road to checkpoints 3 and 4 were hard and leggy. I know that I was struggling in the claggy ground and my much loved Topo were choosing to carry the weight of the muddy fields beneath them rather than clear quickly but thankfully the company of Dave was deflecting from the exhaustion in my undertrained legs. However, as much as I loved Dave I could have killed him when he directed us down a path at the side of a Morrisons Supermarket – the trouble was that the fence had collapsed and we were required to crawl on hands and knees through the dog turd laden path! The worst 150 metres of running in over 150 races! Still all good fun. 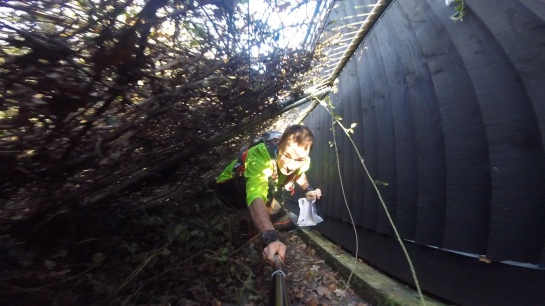 There were a few miles left after our ‘tunnel’ experience and we ambled purposefully towards the finish – the unrelenting nature of the route meant that even these last few miles felt tough but I believe both Dave and I (and everyone else) will have had a brilliant time. Ambling in the direction of the finish we were passed by a couple of runners once more and waved then cheerily onwards as we made our way but less than a mile later we came to a crossing of the ways, in one direction we could see the village we were aiming for, in the other the two runners who had strode last us about 10 minutes earlier. In the distance we could see them questioning them their directions and decided that this answered our own quandary and we crossed the field. 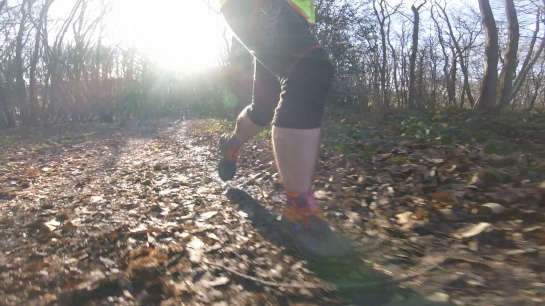 Feeling rather chipper now, although I’d pulled a groin muscle at about mile 20 which was making things a bit unpleasant, we jogged and chatted our way through the last of the mud and into the glorious sight of the parked cars that the runners had left earlier. We were nearly there, a final last shunt and a stop at the finish line to ensure we crossed the line together.

Caked in mud and filled with joy we collected our medals and removed our footwear before disappearing off. I can’t recall if I thanked Dave for all of his support but without him I wouldn’t have run this nearly as swiftly or as easily – cheers geezer.

Route: The route was really very interesting and varied, remaining on the trail for the majority of the race. It also took in some of the St Peters Way I believe, which I think is one of the best kept secrets in England for a really tough path to run. This is a highly recommended route. The self navigation element might be a worry for some (as it was for me) and the description looked incredibly daunting but when you’re out there and you’ve memorised a few of the abbreviations the it becomes much easier. Saying that though I still added a solid mile and a half additional distance to my journey with mistakes in my navigation.

Organisation: I’d run with Top Day Events at Hockley Woods last year and the organisation was immaculate and they replicated this over the longer distance with a well drilled and incredibly supportive team for whom nothing was too much trouble and it had an informally professional feel to it which made for a great day.

Support: Aid stations about every six miles and lots of sweet and savoury snacks available – it was a really good spread and the supporters, be they the volunteers or the runners individual supporters were fantastic.

Awards: Medal and some post race food and drink. Lovely. All nice and low key but perfect reflections of a perfect race.

Value for money: I rate value against criteria like the route, the medal, the experience, the support and of course the cost. Against all the above criteria this race is a class act and deserves to sell out year in, year out. It’s a great race, it’s great fun and a good reputation for it is very much deserved. 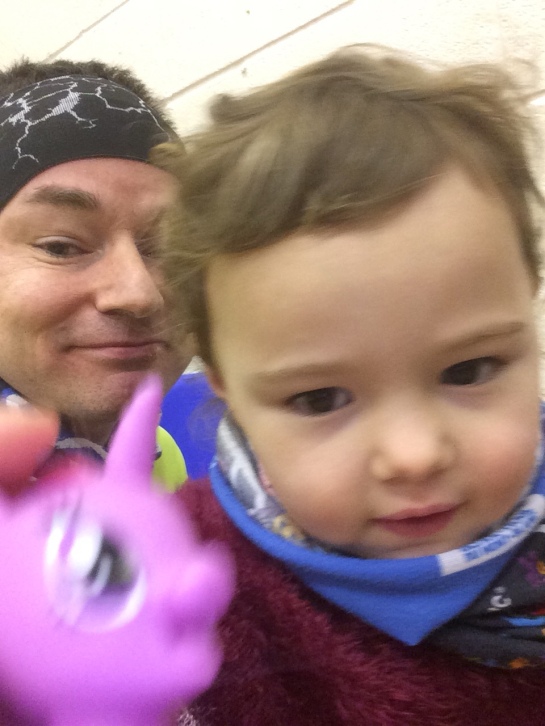 Conclusion: Low key, well organised, intimate, full of trail marathon runners who just love being out there and in the mess and a wonderful day for it made the East Hanningfield Marathon a real classic and worthy of your attention. Top Day really are putting on great little events with lots of heart, try them out and definitely consider giving the East Hanningfield brute a little go.

Keep up the good work guys.