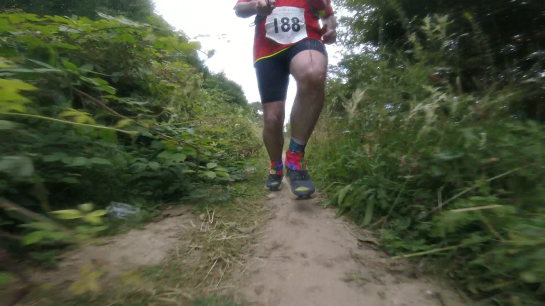 Well Tweeters, Facebookers or bloggers Mary (ahealthiermoo) suggested I answer a few questions about myself so I’ve done so. I’m not sure if you’re going to learning anything about me but what the hell here goes. If I had to suggest anyone I’d like to answer similar questions it would be @SarahCRunning, @ultrarunnerdan, @chelseagreg73 and @ChiltonDiva

1. What made you decide to start blogging?
I had been blogging under a different pseudonym for about 18 months but that had become confused with my life as a graphic designer and so I quit blogging, plus I’d also started to receive enough unkind comments that having my head above the parapet seemed unwise. It was at the suggestion of a friend that I consider returning under a different more anonymous guise and so UltraBoy (and subsequently UltraBaby, The GingaNinja and ThunderPad) was born. I started blogging because I wanted to write about my experiences of running – the good, the bad and the indifferent. It didn’t and doesn’t matter if it gets read as it serves very much as a record book of my time in running. I’m lucky that I have an audience for the things I write but if nobody but me read it I’d still do it. Wouldn’t you?

2. Have you ever met any other bloggers in real life before?
Strangely I’ve met lots of the bloggers, tweeters, Instagrammers and Facebookers that I follow – most by chance. For example, Mary, who nominated me to write this post, I met when I looked up to the number collection table at Country to Capital and there she was.
I’ve been very lucky in meeting my fellow bloggers (and usually runners) most have been kind, warm and with time to give and I hope that’s what I’ve been able to return (oh and some poo stories). I’d draw particular attention to the likes of UltraRunnerDan, Abradypus, Susie__Chan, Borleyrose, Conwild, RunnARGHHH, ChiltonDiva and Em1506 as examples of runners it had been my pleasure to spend time with and there are some I’m very much looking forward to meeting (when I feel less fat) such as ChelseaGreg and DT_76

3. How many blogs do you follow?
Too many, I link to most of them on my own blog but the ones I read on a semi regular basis I keep open as windows on my phones browser and I can then just dip in when it’s been a while. I’ve got favourites abradypus, ahealthiermoo, dreaming of footpaths and fat-to-fit have been consistently my favourites since I started blogging and I keep hoping that one day the Wonky Wanderer would get hers up to date or that @sarahcrunning would start writing a running blog as I’d find that fascinating I think.

I tend not to follow blogs that are all about numbers or detailing the excruciating minutiae of a race – I like to read about experience and life and so the blogs I follow are the ones that do that best.

4. As today is A level results day, what did you take for your A-levels? (Or GCSEs if you didn’t take A-levels)
Now that’s long and complicated – I studied all sorts of stuff at GCSE, 11 different subjects that I barely remember what they were and then started A levels in Art &Design, information technology, History and maybe Maths (I don’t really recall). However, a very public argument with the headteacher one afternoon about the treatment of one of his own staff set me on a different path and I went and studied Art & Design elsewhere, eventually becoming the designer I’d always wanted to be.

6. What has been your favourite running experience?
There are a few, in race terms I think the SainteLyon just pips the Skye Trail Ultra to the award simply because it didn’t hurt as much and it felt like a great big middle finger to extremism – coming as it did just three weeks after terrorist atrocities in France. The fact that it was a truly brilliant race obviously makes it pretty special and it helped to erase the terrible memories of the CCC. There are other things though, racing my Spaniel because he’s awesome and the first time I took UltraBaby running (aged 3 days old).

There’s almost too many to go into really but basically I’ve had a great time running.

7. At what point did you realise that you were no longer a non-runner?
I’ve always considered myself a runner, but still to this day I’m very much a fun runner – I remember school sports days and being quick, the 100metre sprint at secondary school and running significantly under 12 seconds, the first time I ran 10km was in Preston in 2004 and all of these memories made me feel increasingly like a runner.

8. Are you a fan of obstacle races?
Who doesn’t? My first race since I returned to running in 2011 was the Grim Challenge and I’ve loved a good OCR ever since. Interestingly I prefer an OCR with natural objects rather than man-made challenges therefore the Grim will always win out over something like Survival of the Fittest.

9. What has been your largest fitness expense?
There’s been a few wastes of money which would certainly fulfil the requirement of ‘largest fitness expense’. There was a gym membership which I had for a year and never used or there is my excessive collection of shoes – currently I have 35 pairs of shoes on the go, there was also the entry to TransGranCanaria which I decided was a race I couldn’t compete in this year.

Therefore, foreign ultras will always qualify as my largest fitness expense but my favourite big fitness expense will be the £700 I spent on the Mountain Buggy Terrain (and accessories). However, the running buggy has proved a great investment as UltraBaby and I do enjoy hitting the trails together and those are memories I hope we will both cherish for the duration of our lives.

10. What is the nicest thing anyone has ever done for you?
I haven’t spoken to my mother in 20 years – I should thank her.