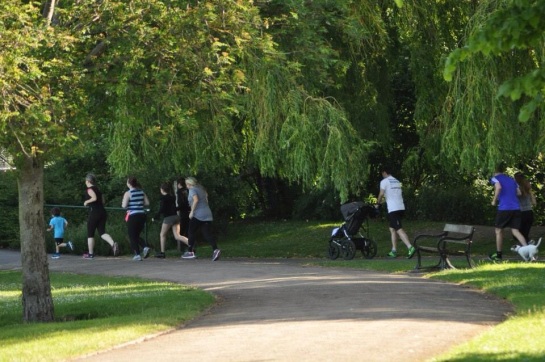 It’s day 18 of Juneathon and I’ll be honest I’m not really enjoying it. The chest infection I’ve been fighting for the last week has put a damper on the fun of running but it’s not just that – Juneathon for the first time seems quite isolated and I don’t think I’m 100% alone in that feeling.

I’m not the first to mention it but the Twitter community part of Juneathon seems a little lost – yes there’s lots of us posting times, distances and blogs but without any connection. Having done a couple of Juneathon and Janathon events before the thing I liked the most was the connectivity of it all.

I met ultra running legend @abradypus through Janathon at a time before either of us had started our ultra journey and I met the awesome @follystone through the same event. It’s fair to say that Jan/Juneathon very much started my love affair with the online running community and perhaps this is why I am disappointed by the online community aspect of it this time around, it has previously given me so much and this time it’s just not got going.

Now in defence of Juneathon it’s fair to say I’ve had lovely moments with people like @iRunSalt, @follystone, @drdavehindley and many others and we’ve been supportive of one another but there hasn’t been that big party vibe that was once the hallmark of Juneathon. I suppose it’s also down to me to bring the party along and in truth I haven’t – I haven’t tried to get near the top of the running part of the leaderboard and I’ve been cheating on the blogging by handwriting my efforts. I’ve also avoided the Facebook element of the event because I prefer the semi anonymous nature of UltraBoyRuns.

So is anyone but me to blame for my lack of exposure to the fun side of Juneathon? Sadly it would seem not.

There’s also the lethargy that’s kicking in with the postings in the last few days. I suspect that many of us who sign up to something like this believe it will be easy to run, log and blog for 30 straight days but they’d be wrong and we are starting to see sore knees, ankles and everything else as the effects are taking their toll. I’m including myself in the negative output as a chest infection is curtailing my efforts somewhat, but with my chest starting to clear a little bit I’m going to make much more concerted effort to congratulate, cajole and motivate people to finish Juneathon with a bang. I really wanted to feel the highs you get from community running and sharing and we’ve got 12 days to make this feeling happen …

So come on guys and girls – let’s make this happen, let’s get our totals up and not let our legs give in.