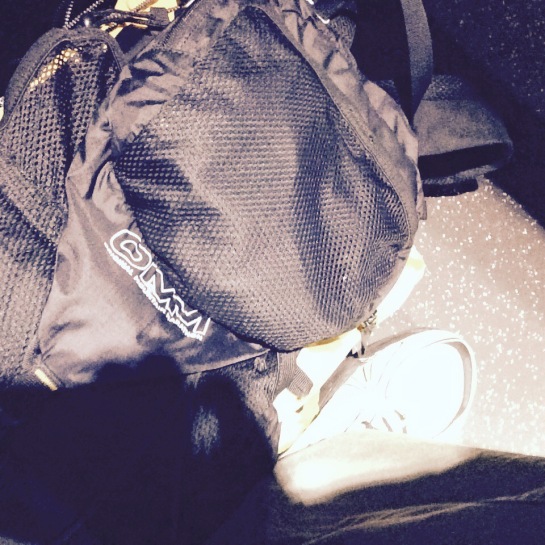 I was looking down at my bruised and battered OMM 25litre commuting bag recently thinking ‘it might be time to retire you my faithful old companion’. The elasticated cord on one side is gone, the other worn, one of the belt pockets has a hole in it and the webbing on one of the side stuff pockets is definitely the worse for wear. On the inside it looks tired – fabric that has been pulled and stretched in all directions and generally covered in sweat, blood and tears from dozens of races and thousands of miles. Strangely though it never gives up and my OMM bag reminds me a bit of my running journey.

1. We both started shiny and new in late 2011
2. We both started running just 3.24km per day until we worked our way up the White Cliffs 50 Ultra.
3. We both carry far too much stuff everywhere we go
4. We both look a bit the worse for wear

Late in 2014 I seriously considered retiring from running completely because of injury and my own stupid behaviour but much like with my much loved OMM running bag it just wasn’t time to enter the great running club house in the sky. I had the thought that it could be one last ‘hurrah’ a final year of running the ultra distance but as The GingaNinja reminds me ‘you become unbearable when you’re not running’. And I am unbearable at the best of times. So there can be no ‘last hurrah’ if running is what helps make me bearable!!

In hindsight I’ve come a long way in a little under four years I’ve gone from geeky designer and all round uncool dude to unbearable and geeky uncoolio ultra running designer. From not being able to run 5km without wanting to puke to going 104miles in a single hit and then back again.

It’s true that running has been my most frustrating time but it’s also been my best time and my strongest ally. I’ve improved my fitness, my interactions, my willpower, my energy and everything else – maybe that’s why my life is infinitely more settled today than when I wasn’t running. Running for fun rather than running from life?

So when I look at my OMM running pack and I see a piece of kit that’s had the shit kicked out of it I actually think, ‘what a ride’ not ‘poor bag’.

Injury, apathy and lethargy will pass but running (or whatever you love) can stay with you and help provide direction. I think my message would be ‘don’t give up’

So how far have I come?
A very long way in the time since I started running.

How far have I fallen?
Just the odd stumble really.

Why do I persevere?
Because the person I’ve become in the period I’ve been running is better than the one I left behind and I’m not 100% sure it was all the running but i’m sure it played its part.