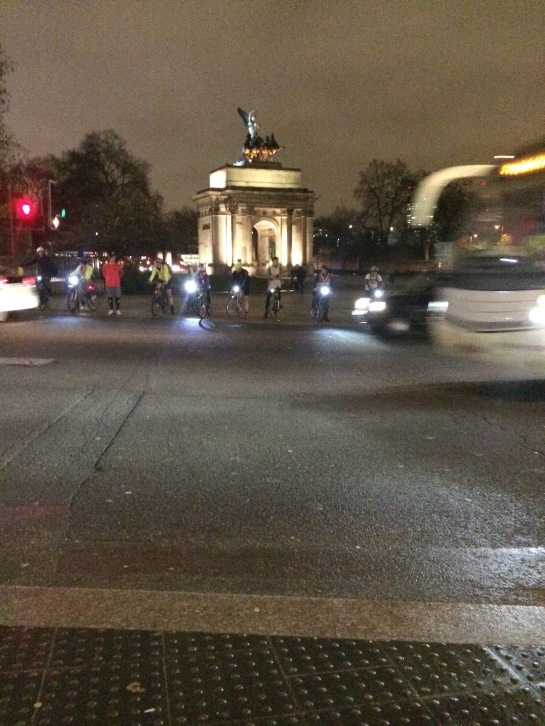 ‘Morning your madge…’ I thought as I cycled gently past Buckingham Palace.
‘Morning armed police officers, pigeons and fellow traffic users…’ It’d just a series of simple thoughts I use to keep me tranquil as I cycle. Occasionally I’ll notice the lycra clad arse of an attractive lady and might put a bit of effort into keeping up with her but generally I’m just bimbling along.

Having gone through my usual ritual I dropped down through the gears as I approached the Hyde Park Corner roundabout and particularly the crossing from Green Park towards the war memorials. This is one of those places that even if the road is clear you don’t risk trying to get across – it’s dangerous and full of unknowns.

It was about 7.43am and the lights had turned red for the traffic and the green man was blazing at the cyclists and pedestrians – beckoning us across the road. It was a surprisingly thin smattering of traffic and the 10 or so cyclists and the 5 runners headed over the road – as we were about halfway a courier van came thundering towards us, in particular 3 runners were in his line of sight. Each of them stepped back despite being more than halfway across the road and rather than hit his breaks the van driver sped up, missing commuters of all shapes and sizes by inches.

In true British form we all did the sensible thing and simply carried on with our journey but several of us spoke as we prepared to cross the second set of lights and we were all a little shaken.

‘Inches.. that’s all it was’ said one
‘He ACTUALLY sped up’ said another
‘Cunt’ was the response of the third

I asked if they were okay and then went about my business but I was nervous that day and since it happened about a fortnight ago I’ve been much more conscious of the traffic lights, the flow of traffic and annoyingly I’ve even been cycling more slowly.

I suppose the lesson is that commuting in London is a dangerous game whatever your mode of transport and that you must be constantly vigilant as not everyone follows the laws of the land.