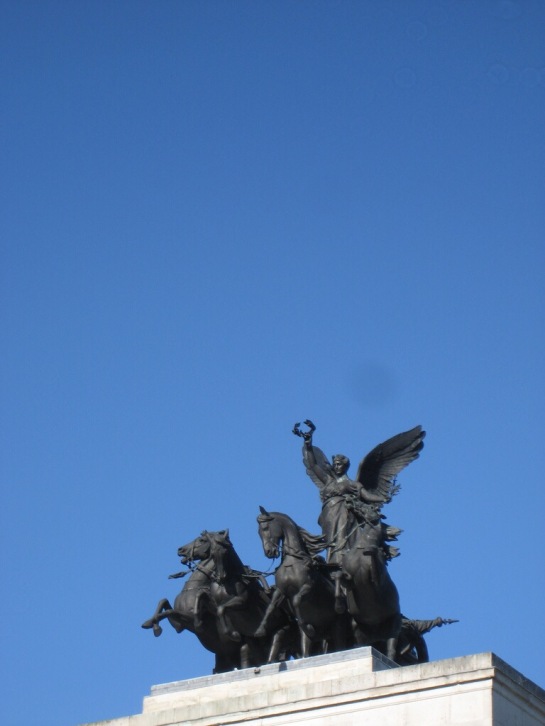 Each leg of my new work commute is about 10.6km long, it starts on the Embankment and it finishes just beyond Hammersmith – it’s a ride filled with some pretty cool London stuff. I ride past Nelson, the Big Blue Cock, The Mall, Buckingham Palace, Hyde Park, the Royal Albert Hall, St James Park and lots of other really cool stuff. It’s not very hilly – I haven’t measured the gradients but despite it going up and down its alright, my little folding bike copes admirably. Today though I’m going to focus on an element of my journey I find terrifying and that’s the roundabout at Hyde Park Corner – this is where this post becomes a little London centric so my apologies if you don’t live here or have no idea what I’m on about.

We shall be focusing here on my return leg, because that’s where this shit gets problematic.

There are two ways to get across the roundabout – the first is the pedestrian and cycle route, let’s talk about that. So you zoom up to crossing 1 but they’re on red, fine, you stop and wait but in the meantime crossing 2 is crossing, you get the go signal on crossing 1 but as you approach crossing 2 it’s all STOP! Red light means danger, thanks Billy Ocean, we know! You’re now sat at crossing 2, minutes tick away and I mean minutes, as soon as you get the good to go you hit the afterburner but then you’re greeted by about a hundred other pedestrians and cyclists all desperate not to have to wait at crossing 1. This ‘Dance of a Thousand Bikes’ means you’ve all but ruined your chances of making crossing 3 – no matter how quickly you sprint to the line you’ll always be beaten by the computer – you can’t really outthink it on this. You finally make crossing 3, you travel slowly, creeping towards the edge of the pavement and then just when you see that tiny break in the traffic you race forwards and onwards to Buckingham Palace. By this point I’m usually grim faced and rather annoyed as I know this travelling has caused me to miss the 6pm train.

But what about option 2?

This is what I call ‘The Shitbucket Just Got Real’. So you’ve just got to crossing 1 but rather than head to the second one you join the road – ahead of both the pedestrians and the cars (you need a head start). If memory serves there’s a series of about 4 or 5 lanes, splitting off in differing directions (Park Lane, Piccadilly, The Mall, Victoria and Knightsbridge the main options). I’m aiming for the tangent that is The Mall. So, as Crossing 2 turns to red for the traffic I join the roundabout and peg it.

Let’s not forget that the folding bike isn’t really built for speed but I throw every last ounce of energy I have into it and I grab a lane hoping that I’m not holding up traffic.

All around you there are vehicles of all shapes and sizes, most moving at pace as the traffic lights are ‘with them’ – my aim is to hit my tangent before the traffic catches me or before the traffic flowing in from Piccadilly catches me. It’s terrifying, hence why I need a ‘Shitbucket’ strategically placed at the bottom of my shorts. The benefit of this is that I do make the earlier train, the downfall is that at some point I’m going to get clipped or worse. As I’ve stated before I’m not a great cyclist and this isn’t helping my nervousness!

Any tips on how to avoid this? Well I suppose the tube… but that defeats the purpose of cycling!