As regular readers will know I’m one of those runners who converted to Hoka One One maximal running shoes about a year ago and have generally been very happy with the results this change has given. I converted mainly to help reduce the damage being done to my feet over the ultra trail distances and this has worked fairly well. So when I heard that Hoka would be at the London Marathon Expo I decided I would pop along and try out some of their road running shoes.

I tried both the Stinson Tarmac and the Rapa Nui 2 both aimed at the road runner and with a great deal of satisfaction I decided I’d purchase the Rapa Nui 2. I liked the aesthetics of the shoe and I liked the stiffer feel but also the slightly lower profile than the Stinsons. I felt for road that sitting so high up I was probably asking for trouble as I bounced on and off pavements.

Therefore almost a month later I’m now committing my first running thoughts about these shoes to blog. Let’s start with the numbers, I’ve covered around 200km in the shoes taking in two ultras and a 10km race. But what details do Hoka provide?

But are the Rapa Nui 2 Tarmac any good? Well… my first run in them came as a fast(ish) 5km, taking in some of the speedier downhills around Kensington and Victoria, here the Hoka felt fast, light and fun and after a couple more lighter excursions including a swift 10km around Regent’s Park I decided that these would be my primary footwear for the WNWA96 – more a swift hike than a straight run.

The shoes performed admirably across the first 15 or so miles but after this there was a deep sense of fatigue in my feet. The unrelenting tarmac, which I thought the Rapa Nui 2 would eat up, was causing problems on my feet. The shoes felt like they had no give in them and despite the cushioning I could feel every bump or lump on the road. At mile 26 therefore and the first significant stop I made haste to change out of these and into my much loved Stinson Evo and the difference was enormous – despite being a trail shoe they offered a lot more protection over the next section.

I had thought this might just have been that my feet hadn’t properly broken in the shoes and so in my training after the WNWA96 I continued to wear the Rapa Nui 2 and in fairness to them they covered the 10km distances I was running with great aplomb and they felt light enough on my feet that I was confident I could run them across the National 100km distance. The trouble was that long before I rolled my ankle in the race the footwear was proving to be a bit troublesome, for my money they are just a bit too stiff and cause too much foot fatigue over distance – at least in my experiences with them.

I don’t want to be too downbeat on them because there are tonnes of positives, they are comfortable, spacious, they feel incredibly well made and they look beautiful – less moonbootish these days. They do however remain rather expensive and I’m disappointed that the purpose I bought them for (road and summer ultras) they probably can’t fulfil. Additionally they don’t feel super fast enough to be able to unleash over shorter distances – you’d still go for your racing flat over these. So a mixed bag I’m sorry to report.

So in conclusion I’m a little disappointed by the Rapa Nui 2 Tarmac – these are not the all singing solution to every runners problems – but if they weren’t quite so stiff they might well be and I’ll be looking at the version 3 whenever it comes out. 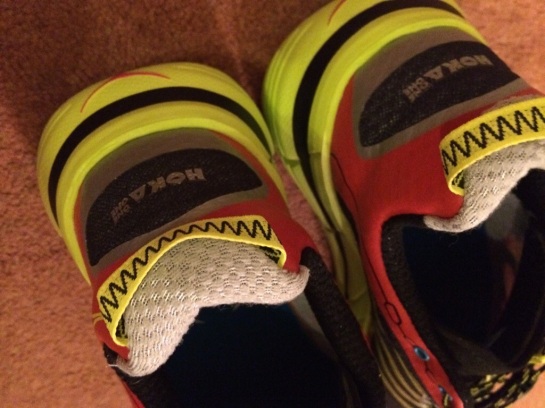