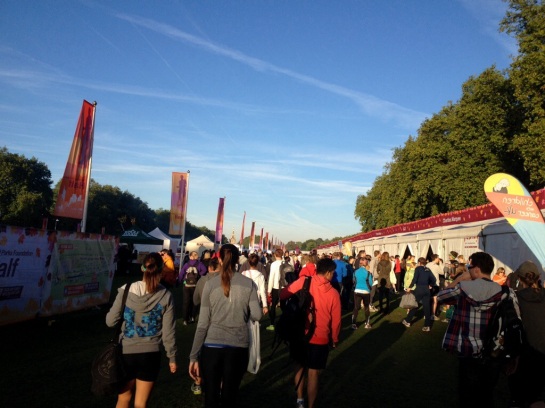 Let me tell you a story about a guy who woke up at 5.30am this morning after a poor nights sleep and quickly showered, threw on his Nike Tailwind vest and hurtled to the train station for only his second half marathon of the year – The Royal Parks Half – and yes the bloke in question was UltraBoy.

Let me add a bit of background, the RPH was my first ever half marathon distance race back in 2011 and it was in that first year of running an event I looked back in with great pride and even today I look at that medal and think ‘yep that was special’. So going back had a lot to live up to and I’m also a very different runner to the fearless youngster who arrived at the start line 2 years ago full of confidence. This year I headed to the event centre in Hyde park and had a windfall wander around with the 16,000 other runners, got changed, had a few laughs with other runners, deposited a bag and absorbed as much of the positive atmosphere as was humanly possible. I joined the line up rather later than is my norm with less than five or six minutes until the horn would sound but this was more than adequate to make a few new acquaintances on the start line. There is something that draws out comradeship when you are about to do something ridiculous.

Anyway! The horn went and with a slow shuffle to the start it all began, now while the start was very well organised it did take nearly 7 minutes for me to get to the start line which seemed a little too health and safety conscious for my liking, however, once we were underway I set about making sure I had left the 1.50 pacer as far behind as possible and make my moved up the field and as I came into mile 1 I was running solidly and without any issues other than a mild concern about the rising temperature. By mile 4 things were actually looking pretty good, I’d refuelled on Lucozade and water and turned onto the Mall with a fair old turn of pace. The passion of the crowds was also pretty infectious and you felt the need to puff out your chest and give it your all for the people who were lining the streets of London just to cheer you on.

Miles 6 through 8 continued to feel strong and only a mild discomfort in my underarms was causing me any trouble. The thousands of runners and spectators were offering lovely views of what is a wonderfully busy event and I was delighted by my progress but just as I hit mile 9 I could feel the pain of my hip coming back and I could feel shooting pains throughout my back. I changed my style of running to make it a little easier and was able to come through mile 10 but the cost was high and I simply had to slow down, the problem with this though was that the 1.50 pacer caught up to me and I felt a great sense of deflation. My aim for this had always been under 2hrs but my progress over the first 9 miles had been such that I had delusions of a 1.45. By the time I reached mile 11 I knew I was going to make it but the thought of finishing was tinged with the significant sadness that I wasn’t going to get anywhere near the last time I put in for this race.

The finale through Kensington Gardens and Hyde Park are well known to me as they are part of the London Social Runners Saturday route and part of my training runs through the city and so I was able to gauge the slit incline up to Hyde park and give it the requisite amount of fizz needed for a solid and fast finish. I crossed the line in 1.53 but it wasn’t a happy time and I was sore in the hip and underarms. There is the part of me that should remember that this is the second longest distance that I’ve run since June and my training hasn’t exactly been tip top but the excuses aside I should have done better.

I made my way through the scores of runners and spectators to collect my medal and headed off to collect my back before a short wander around the festival site and here is whee is got weird. What I hadn’t realised was that my poor nipples had been bleeding for much of the race- the pain in my underarms had clearly been the bleeding out from the raw exposed flesh! I looked a little bit like a transvestite a I crossed the line, a sweaty dirty one (take a look at the picture below).

Anyway what can I say that hasn’t been said about this event, probably very little, it’s a wonderfully well organised and a wonderfully supported event on the race calendar and it’s a nice PB route through some of the best bits of Central London. However, things to be mindful of a) it’s busy and some slightly inconsiderate runners were happy to push past b) it’s too expensive, at £46 this is one of the pricier races around of this distance and for the same money you could enter 2/3 other smaller races and support them and c) it does lack some of the excitement you get with a more undulating and dynamic course. That’s not to say you shouldn’t do it, if you were only ever going to do one half marathon then you would seriously consider this but the caveats remain in place.

For me this will be the last time (at least for a few years) that I enter the Royal Parks half but I will be back and I will get that PB on this course.

And finally, I love the new medal too 🙂